The Port of Tallinn launched the competition for ideas for the development plans or Masterplan 2030 for the Old City Harbour in 2016. With the aim of finding a comprehensive, long-term solution to connect the city and its public spaces with the functions of the port, Masterplan 2030 will form the basis for the redevelopment in the port area into an urban space that is both attractive and easy to traverse.

Tallinn is one of the fastest growing ports in Europe, meeting an increasing demand for its services due to its success as a growing hub for cruise ship and ferry passengers as well as cargo. The masterplan consolidates and improves all the vital activities of the port while also offering land for civic use and development.

As one of the best preserved medieval cities in Europe, Tallinn’s Old Town is a UNESCO World Heritage Site, while the Estonian capital is a global leader in advanced digital information technology, establishing one of the world’s most connected societies. The new masterplan celebrates this diversity and links together disparate districts of the city, creating a vibrant new community near the city centre that will provide an alternative to the city’s Soviet-era housing stock.

The masterplan re-establishes and reinforces the links with the Port of Tallinn and the Old Town, as well as the links between the city and the sea; providing connectivity from the ferry and cruise terminals to the city centre, and at the same time creating an integrated new neighbourhood for the people of Tallinn. With vastly improved access to the waterfront and new public spaces, the masterplan ensures the Port of Tallinn will become a popular civic focus for generations to come.

While contemporary in concept, the new masterplan deliberately preserves the city’s urban fabric, its vistas to historic landmarks and its views to the sea. The new city blocks within the masterplan will continue the existing scale of adjacent districts. The flexibility of the masterplan’s civic zones allows for a rich combination of uses – including culture, entertainment, shopping and hotels – to serve Tallinn’s residents and its growing number of annual visitors (anticipated at over 5 million in 2017). The new pedestrian quayside incorporates terraces served directly by cafés and restaurants.

The masterplan is structured around a central pedestrian promenade to create a sequence of varied civic spaces which connect the city and its harbour and link together the different phases of development.

“We’re honoured to work with the Port of Tallinn, developing unique solutions to create these important connections for the Old City Harbour’s long-term vision. Supported by its network of new pedestrian routes and public transport links, the masterplan reinvents a familiar space in Tallinn and reconnects the city with its harbour, enabling residents to reclaim a part of the city that is currently difficult to access and designed only for transit.”

Valdo Kalm, the chairman of the management board of the Port of Tallinn, explained Zaha Hadid Architects’ masterplan stood out for its innovative and integrated approach to Tallinn’s maritime gateway.

“Zaha Hadid Architects have very skilfully created a balanced connection between urban space and the port area with some carefully considered access roads and traffic solutions,” he said.  “What stands out in their designs are the diagonals running through them of the pedestrian footpaths, around which a very diverse and memorable city space has been established.  Interesting details include the water features they’ve designed along Reidi Street and their partial – and very smooth and effective – raising of the areas for pedestrians up to another level.

“Adding to the overall feel of integration in their designs is the urban square and greenery they’ve come up with for the area around Admiralty Basin, stretching all the way from the front of Terminal A to the front of Terminal D. Their entry was also marked out by strong logistics and property development analysis and a convincing and realistic projection of the implementation of the Masterplan stage by stage.”

The Port of Tallinn and Zaha Hadid Architects aim to complete the masterplan for the Old City Harbour by the end of 2017. On completion, detailed plans will be commissioned and suitable business models elaborated for development implementation. 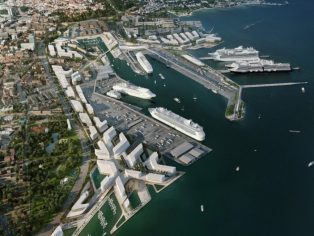 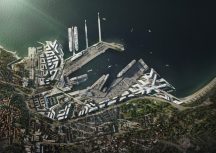