From 60 nominations worldwide, the best interior of 2014 has been named at an international awards competition and festival in Singapore: MOTT32 by Joyce Wang Studio.

Announced at a ceremony at the world famous Marina Bay Sands hotel as part of the INSIDE – World Festival of Interiors, the project was recognised by the judges for its dramatic and successful transformation from a basement in Hong Kong into one of the city’s best and most beautiful eating destinations.

Located in a former storage facility, which once housed expensive family heirlooms for wealthy Chinese immigrants, MOTT32 is now an atmospheric underworld dining experience. Taking inspiration from the heritage of the site, the restaurant is littered with forgotten heirlooms, Chinese propaganda and industrial materials doubling as furniture and light fittings. Joyce Wang Studio took a decaying space and combined traditional Chinese décor with industrial design elements, already popular in New York and London. Located underground, with no natural light, the designer embraced the constraints of the venue and used them to create a theatrical and exclusive experience as guests are guided downstairs through a long, snaking corridor.

Inside the restaurant, bricks twist and turn and form shapes inspired by wind patterns. Light fittings are housed in metal mesh cages and former vaults become exclusive booths. Delicate detailing combines with raw materials, such as concrete and metals, to create a bold design that sees Western and Eastern influences combine.

“Winning the World Interior of the Year will mean so much to the team. We are a practice of ten people and the project was very personal to the entire team. It was a Hong Kong project, it explored Hong Kong culture both past and present, which makes the project such a special one and winning this award even better.”

The judges came to a unanimous decision to select MOTT32 as the winner from nine category winners.

David Kohn, winner of last year’s World Interior of the Year award and judge for this year, said:

“Joyce Wang Studio took a constraining location and maximised what was possible, using the existing structure to create a sophisticated and detailed project.”

Pernilla Ohrstedt, the designer behind the Coca-Cola Beatbox – the interactive pavilion on the London Olympic Park – and judge of the award added:

“A wonderful series of rooms with a rich texture and narrative, creating a movie-like and theatrical environment for the diners. From small details to the complete design, everything has been thoughtfully considered and was a stand-out candidate for this important award.”

INSIDE – World Festival of Interiors 2015 will take place 4-6 November next year and Joyce Wang will become part of the distinguished judging panel who will decide the next winner of the World Interior of the Year award. 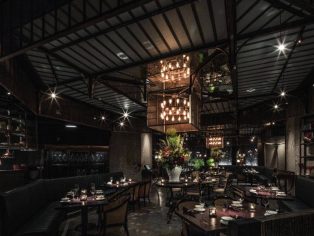