Two views of the river

A new pier has opened for the Thames’ main river taxi which provides new public space as well as vital transport infrastructure, in a design which divides the structure into two to make the most of its location. James Parker reports

Navigating central London via its river is not yet something that many Londoners do on a daily basis. However more commuters are now using the MBNA Thames Clipper river taxi service run by Transport for London from Battersea to Woolwich, alighting to and from a striking new pier at Royal Wharf in the East End. It’s the result of a client who wanted to go beyond simply creating a practical means of mooring this sizeable vessel, to creating a considered architectural addition to the city which provides new public space on the river.

Ballymore and Oxley’s Royal Wharf is a major new riverside mixed-use development of low and medium-rise blocks including around 3,400 residential units, and located just west of the Thames Barrier and south west of City Airport. According to Alan Dempsey, director at architects Nex—, Ballymore and Oxley “were looking for something different” when they appointed the firm, who were in competition against a clutch of much larger practices.

This explains why they had the confidence to pick a firm with no experience of transport infrastructure, but possessing “a very clear vision for how this pier could address some bigger questions,” says Dempsey. It was to be much more than just a “bus stop,” he says, but would “contribute to the city and the riverside in terms of providing a meaningful public space.” In addition, the client was also attracted by the practice’s keenness to collaborate, including with the marine engineers on the project, Beckett Rankine.

The steel, aluminium and timber structure replaces a derelict jetty with something with a great deal of architectural merit, but which also serves the practical needs of a new population of city dwellers living in Royal Wharf but commuting to other parts of the city. It has also been designed as a public space in its own right, so serving the potentially conflicting needs of lingering visitors and commuters in a rush was a key challenge for the architects.

In Dempsey’s words, the client’s desire was that the pier should be “distinctive, high quality and memorable,” and that’s why “they looked for the design to be a close collaboration between an architect and engineer.” The key distinguishing aspect of the pier is its ‘dog leg’ structure, angling out to the east from the riverbank to a triangular public viewing platform pointing towards the Thames Barrier, then back towards the city, terminating in a floating pontoon waiting area.

This division initially came from an architectural decision to break the pier down into “more manageable distances,” says Dempsey. The pier needed to extend 130 metres to reach water deep enough for the Thames Clipper during all tides – the tidal range is high at that point of the river – but this would have made for a long, and perhaps oppressive walkway. He adds: “We didn’t want the sense of travelling down a tunnel or a long series of gangways, it was really about opening up the expansive views wherever we could.”

With the decision made to separate the pier into two sections, the architects decided to design the first 40 metres as a generous “public promenade.” This is divided by a clear boundary from a second gangway section more focused on efficient transport of pedestrians – this boundary provided both by the viewing platform, and the sheer fact of the dramatic change in angle.

The result is almost to provide two piers, given they have two distinct horizons for users – the public promenade in particular “draws upon ideas about British seaside and river piers, and the open horizons you get from them.” From the promenade, there’s an uninterrupted view east towards the Thames Barrier, thanks to the 162 m2 triangular viewing platform being enclosed with a frameless balustrade of “ultra-transparent” glazing. Then as the pier heads back westwards, there’s a view of Greenwich and Canary Wharf, also gained through the 4.5 metre glazed wall of the covered waiting area.

The public promenade section is over 5 metres wide – considerably more than the minimum needed to get to and from a pontoon. Dempsey says this will allow people to linger and look while commuters move past them. “You might have 50 people embarking or disembarking at rush hour, so there’s space for people who might already be there, moving at a slower pace.” The promenade also has a generous wood parapet designed for people to lean on; “it invites pausing.”

The 65 metre long gangway is more enclosed than the public space, to protect commuters heading further out into the river, with a steel roof. Diagonally arranged aluminium battens which have been powder-coated in a copper hue run along the sides, continuing from the public promenade section and echoing traditional pier design. Rising above the parapet here however to support the roof, the walls’ ability to let in daylight helps avoid a claustrophobic feel while protecting users from the elements. While narrower than the public section, the space’s 4 metre height further avoids any sense of “feeling compressed into a tube.”

In terms of structural engineering, the first span creating the public promenade is straightforwardly broken into three sections of supports, with a pile at each junction, and the triangular platform is fixed onto further piles. However the gangway is floating, like the pontoon, which has a pair of ‘dolphin’ piles holding it place in the river. The gangway section, despite being longer, is a single span, a more pleasing visual result which required “working very closely with the engineers to work out how we could do it in one piece, rather than cut it up and bolt it back together on site.”

The pontoon that houses the waiting area is a neatly designed, rhomboid in plan structure which exploits the change in level necessitated in the second section of the pier by the first section being flat for the benefit of the public. Leaving the gangway, users arrive at the top of wide wooden stairs which continue around the space as seating, like a miniature amphitheatre, and are given a “nice overview of whole space.”

Users may also descend the final metre and a half to the floor level by a ramp, which wraps around the rear of the seating area; the ramp is separated from the seating area by a semi-enclosed timber screen wall that offers waiting commuters protection from the wind. Dempsey explains how this successfully addresses the level change: “We wanted to keep it as level as possible on the promenade, so the challenge was how do you design that ramp in an integrated way so it feels a natural part of the pontoon rather than a separate mode of access stuck in the corner.” In the evenings the ‘wrapped’ nature of the screened seating “makes for a comfortable space that people don’t feel intimidated to spend time in.”

The shelter’s form is “defined by its cut and folded butterfly roof,” say the architects, helping accentuate a feeling of lightness by concealing the structural dolphin elements behind compact service zones enclosed in a light grey metallic cladding. There are four slender internal steel columns, “more required to hold the roof down than hold it up because of wind and tidal loads,” and wrapped in polished stainless steel.

The roofline is sloped to take in direct views towards the towers at Canary Wharf, the O2, and beyond them the City of London. The glazing that runs along the 12 metre front elevation rises to around 4.6 metres at one end, and has two openings allowing users to access a viewing platform.

The mild steel roof is folded upwards like a butterfly for practical as well as aesthetic reasons – aiding drainage, but also helping to bring light into the space. As well as providing an interesting form, light bounces off the water, causing reflections onto the ceiling (which is powder-coated in a similar copper colour to the aluminium battens) and is reflected down into the space. Dempsey says that one of his key inspirations throughout the design was Turner, and the way the painter “incessantly captured the changing light on the river.”

The materials palette refers to both pier heritage and shipbuilding, and “speaks to both the practical needs and maritime setting.” The zig-zagging steel structure is painted a dark, slightly bluish grey to offer a contemporary look that will weather well. The steel wall panels of the waiting area are a pale metallic grey – to “kind of disappear, reflect the light and horizon, and leave the roof to appear to float,” says the architect.

Ekki hardwood timber, well known for its high performance in marine settings, features prominently, forming the stepped seating in the waiting area, and warming the space. The timber is also used for handrails along the length of the pier, plus the triangular sculptural seating on the viewing platform that echoes the shape of the waiting area pontoon.

LEDs mounted in the pier’s structure uplight the copper coloured battens, creating a sense of theatre at night time, and mounted under the parapet, illuminate the black resin walking surface. The viewing platform has LEDs running around the glazed perimeter and the timber seating.

Dempsey says the biggest challenge the designers faced was to ensure the contractors delivered a level of finish to ensure this public space would ‘feel’ high quality. “These are people who spend most of their time making big steel plate and marine structures. It was initially just a change to their mindset to get them to understand we were looking for a precision that was probably in excess of what they were normally used to dealing with.”

Bridging the divide between normal marine engineering and the level of tactile architectural quality that the architects insisted on was further challenged by the design and build project being built overseas before being shipped to site and craned into place. “A contractor could very easily have come back and said they wanted to split it into a number of parts or make certain changes,” says Dempsey. “It took a lot of co-ordination and collaboration between the engineers and ourselves to complete the design to quite a significant extent – to make sure the answer is really the only answer anyone’s going to choose.”

The final product is a visually arresting, but somehow familiar structure in many ways, that both sits well in its context but breaks with normal pier design to maximise its location for all users. By allowing an architect to take the reins in an unfamiliar typology for them, the client has ensured that achieving a high quality finish has been kept at the forefront. In so doing they’ve delivered a piece of exemplary new transport infrastructure for London that also gives some exciting public space to the community at large.

According to Dempsey, the project’s success has been most visibly demonstrated by a visiting US delegation to a major marine conference in late 2019, who alighted at the pontoon. “They were blown away to see that this was the kind of infrastructure that London produces.” This pier is an important part of attracting more users to what is a much more pleasant, as well as effective, means to get around the city. 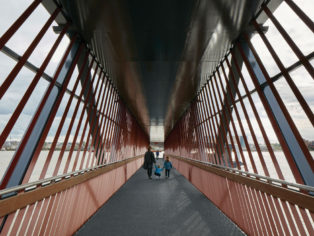 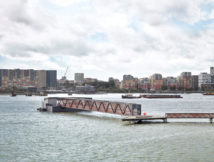 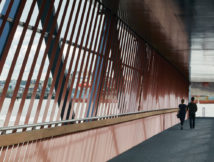 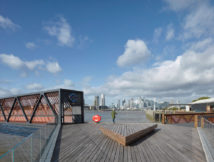 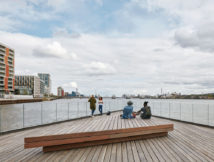 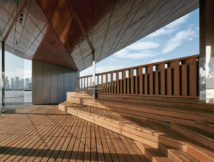 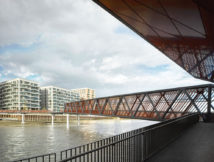 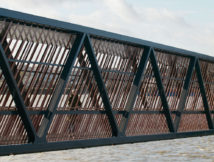