Highest security standards, but not a visual fortress. Naturally lit workspaces despite strictest building requirements. An aesthetically pleasing complex devoid of monotony. The objectives set by architects Jean-Paul Viguier et Associés (Paris) in the renovated and new buildings of the “Banque de France” (French Central Bank) could hardly be more disparate. At the heart of the complex, located to the north of Paris and completed in 2018, is a safe composed of three cubic volumes, in which a quarter of all French banknotes are processed. One part of the complex features a façade made up of custom glazed bricks from Moeding.

Above all else, the decision of the Banque de France to locate its new “Trust Center” in a Paris banlieue had strategic implications: the La Corneuve commune in the north of Paris has a strong industrial heritage. Setting in motion a process of transforming this industrial background into a place of high finance and a cultural landmark, the bank acquired the unused plot from boiler manufacturer Babcock & Wilcox near the A86 autoroute. The land covers an area just over 11 acres and was home to two buildings, dating from 1923 and 1987, that would be subject to redevelopment. A further building, housing the safe for handling banknotes, was also required.

Architectural practice Jean-Paul Viguier et Associés won the competition to design the new complex in 2014. The firm focussed on three key issues: first, the need to remain sensitive to the location’s historic industrial heritage, second, to maintain a clear connection between the constructed architecture and the complex, typically automated processes that take place within it, and third, to create good spatial working conditions for employees at a site requiring the highest security standards.

While the service side of the building, with offices and public reception areas, was assigned to the two redeveloped buildings, to which a glazed staff restaurant was added, at the heart of the complex is the new safe building. It consists of three differently-sized volumes that are interlinked by a triangular inner courtyard accessible only to members of staff. The first houses the technical equipment used to unload money. From there, it is automatically moved to the sorting facility, where staff would normally work in bunker-like conditions. Here, however, the architects proposed a “luminous double skin”, comprising glazing in the direction of the access corridor and a tangible link to the exterior. On the other side, windows and doors open up onto the green, glazed inner courtyard that is both bombproof and bulletproof. The architects desired a particular material for this building’s façade: one that would be easy to care for, robust, and pleasing to look at. It also needed to be unique, sustainable, and made of natural materials. The solution came in the form of white glazed brick panels from Moeding, which worked closely with the architects to develop the panel shapes. The horizontal cut of the panels thus resembles the logo of the Banque de France. They create a kind of optical “vibration” and create depth in the surface and a play of orange, blue, and pale pink.

Forming a modern contrast, the two buildings used purely for technical equipment are lined with a metal façade. The third, tallest structure, the storage facility known as the “greenhouse”, was given an external envelope consisting of sheets of metal with decreasing numbers of perforations as it reaches towards the sky. This lends an optical blur and sense of lightness to the windowless concrete volume. Colour is what unites the three structures: all of them shimmer in brilliant white.

In February 2019, the project was selected from 170 different schemes at the ArchiDesign Club Awards in Paris and received the Audience Award. 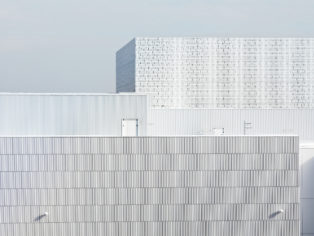 Design studies for the brick panels were conducted to reproduce the logo of the Banque de France in their horizontal cut. The result is a rhythmic effect, a dynamic that contrast with the flat surface appearance of the smooth, perforated metal panels used on the other buildings © Takuji Shimmura

A completely glazed structure for the staff restaurant (centre of image) complements the fully renovated and refurbished building from 1987, which now houses parts of the Banque de France’s offices. The interplay of the three parts of the building in different shades of white can be seen in the background. © Takuji Shimmura

The facade substructure was custom-matched to the building requirements. © Takuji Shimmura

A play of light and shadows in the perforated sheet metal façade of the storage building in combination with the terracotta façade of the building for banknote sorting. © Takuji Shimmura

The large volumes of the three safe buildings, with their different facade linings in shades of white, are arranged on the formerly industrial plot. The building for sorting banknotes, featuring glazed brick panels, can be seen at front left; the renovated building from 1987 that houses the offices is at the front right. © Takuji Shimmura

The enormous storage building is 60m long, 30m deep, and 26m tall. The temperature-controlled high-security building known affectionately as the “greenhouse” is a concrete structure whose lining with perforated metal plates ensures a shimmering play of light. Glazed brick panels from Moeding are used at the base, creating a gentle transition to the accessible part of the building. © Takuji Shimmura