The Princess Royal has attended the launch of new affordable flats for people who work in Westminster in “the engine room” of London – the first homes created from the £125million legacy from the sale of Dolphin Square, the famous mansion block in Pimlico.

The visit took place on Thursday 11th July at One Church Square, Vauxhall Bridge Road, London SW1V 2TA, the new development by Dolphin Square Foundation, the charity set up with the funds raised by the sale of Dolphin Square where The Princess Royal was once a resident.

The One Church Square development has 31 studio, one, two and three bedroom apartments for rent to people who work in Westminster, in businesses and organisations that form an important part of the London economy. In order to qualify, potential households would need to earn at least £30,000. The rents start at £190 a week and are, on average, 28 per cent cheaper than privately rented flats. The flats will be rented to a mix of single people, couples and families. There will also be a further eight flats in the development that will be rented out at market rents of up to £600 a week, providing vital income for the Foundation.

The Princess Royal toured the flats and met future residents, who are typical of many people who work in the heart of the capital but struggle to find an affordable home. Katie Fine, a freelance make-up artist and her husband Michael Kyzirakos, who works in the events team at Westminster Abbey, have been living in a flatshare and would have been forced to move out of London. They will be moving into a one-bedroom flat at One Church Square. The flats have been designed by architects Paul Davis and Partners to maximise space by dispensing with hallways, focusing on open-plan living areas and creating clever storage areas. A roof garden will be planted out to provide outside space for residents and a chance to share in looking after the plants and shrubs.

The event also saw the launch of a new development brand, Dolphin Living, which will set new standards for affordable housing in the private rental sector.

“We are committed to providing homes for people who are a vital part of London’s economy and who are being priced out of the capital. We are creating homes that make the most of the space through clever design while not compromising on quality. The Princess Royal’s visit marks an important milestone for us, the delivery of our first development. We now have nine projects under way, which will deliver more than 500 homes in the capital. We are aiming to have one thousand affordable homes in the pipeline over the next five years.” 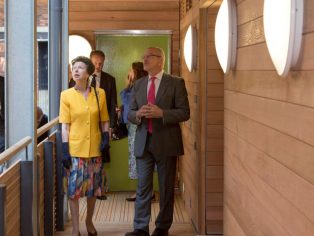 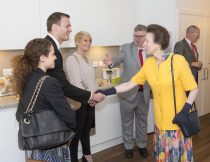