Jess Unwin learns how David Morley Architects successfully dealt with the design challenges of scale, flexibility and adaptability to create a new sports complex for the University of Nottingham.

At its official opening in May it was clear that the University of Nottingham’s new £40m sports complex is a big hit – in every sense.

Yet that impressive scale – the multipurpose main hall alone can accommodate 20 badminton courts – was also one of the key design challenges which faced David Morley Architects.

Chris Roberts, associate director at David Morley, was at the recent launch of the sports complex, which will be three times the size of the 1970s building it replaces. Roberts explains:

“We had a comment at the formal opening from someone at the university who said that even though the building is huge, it still feels like a series of intimate spaces.”

“And that was really part of the design ethos. From the outside and inside, although the sports hall component is obviously large (3,450 m2), our aim was to try and avoid too much of a bulky, hangar-style mass, and bring the project down to a human scale.”

A not exhaustive (but certainly exhausting!) breakdown of what’s available at the DRSV underlines the wide-ranging sporting credentials of this new facility. At its heart, the sports hall can be divided into four bays if required and reconfigured to provide handball and netball courts, trampoline rigs, cricket nets and indoor five-a-side football pitches.

The adjoining areas of the overall building height atrium space that also hosts the climbing wall.

However, even within the Pavilion there are further sub-divisions housing a cafe, the sprint track, specialist strength and conditioning facilities and, high up on the top floor, the fitness suite, covering 1,200 m².

Another volume, roughly on the footprint of the centre’s now-demolished predecessor, is filled by the dance studios and dojo. The squash courts and a flexible-use zone for archery, table tennis and fencing are two further distinct sections within the
overall structure.

Externally, to reduce the mass of the building, its component sections have different, stepped roof levels, while a range of facade materials also helps. The Pavilion is largely glazed, the area occupying the footprint of the former sports centre features a simple black aluminium panel cladding and the main sports hall has a light-grey aluminium cladding.

There’s also space for table tennis, archery and fencing, while other sections are home to a hydrotherapy pool, private consulting rooms and specialist physiotherapy and sports massage services.

A single structure playing host to so much activity could have become a soulless, cavernous monster. But Roberts reveals:

“A key idea we had was to break up the building into distinct volumes, inside and out. That was very important.”

One of those distinct volumes is the Pavilion, a three-storey glass-fronted area that wraps itself around one corner of the main sports hall. Here is where you’ll find the DRSV’s entrance – a full-building-height atrium space that also hosts the climbing wall.

However, even within the Pavilion there are further sub-divisions housing a cafe, the sprint track, specialist strength and conditioning facilities and, high up on the top floor, the fitness suite, covering 1,200 m2.

Another volume, roughly on the footprint of the centre’s now-demolished predecessor, is filled by the dance studios and dojo. The squash courts and a flexible-use zone for archery, table tennis and fencing are two further distinct sections within the
overall structure.

Externally, to reduce the mass of the building, its component sections have different, stepped roof levels, while a range of facade materials also helps. The Pavilion is largely glazed, the area occupying the footprint of the former sports centre features a simple black aluminium panel cladding and the main sports hall has a light-grey aluminium cladding.

Brick was used for the lower part of some of the building’s exterior walls, providing a robust plinth.

“The setting is a Green Flag Award-winning landscaped campus and there is a Grade II-listed building near the main entrance to the complex. In addition, one side of the project is close to homes. We wanted to be sensitive to the parkland and residential properties and not have a new sports complex that would be too imposing.”

The university did, of course, want to achieve the maximum amount of space possible for sporting activity.

“That really came first all the way through the project,” admits Roberts. “After all, our top priority was helping the university to achieve its targets for sporting success and increasing participation in sport.”

The answer was ensuring the main sports hall and other areas could be reconfigured for different sports.

“Something we always try and achieve with our buildings is to ‘do more with less’. So we’ve managed to fit a lot in through the spaces being flexible and adaptable. This might mean, for example, that a space meant mainly for one activity is a certain height so that in can also be used for badminton or table tennis.”

“Working with the university’s sports department was crucial to creating those flexible spaces,” he adds. “The precise detail of the design brief evolved through lengthy consultation. For example, the squash courts were initially configured in a line, but after conversation with the university’s squash coach we rearranged them so he could observe multiple courts from one position.”

“We encourage clients to consider as many options as possible in the early design development stages. It’s at that stage that things can be changed without any cost impact. A constantly updated 3D model was critical because it helped us very quickly show the impact of changes.”

Another part of the DRSV design solution was to unify the new structure with the existing nearby swimming pool building and outdoor pitches. The pool is now connected to the rest of the complex via a covered and glazed link building, and both facilties share a joint reception point.

The boundaries of the new DRSV have been built to all but touch the pitches. An outdoor viewing terrace and the trans- parency of the Pavilion’s glazing brings the outdoor and the indoor together.

Roberts explains that transparency through-out the building was a further design box to tick.

“As a practice we’re always talking about design from outside in and inside out. It seems obvious, but by allowing people to see what’s going on in the building glass animates it, and brings it to life.”

“Internally, glass partitions allow you to see the activities taking place in adjacent areas. It makes you aware of the facilities on offer, perhaps encouraging people to use them.

“And, in this parkland setting, we wanted to make the most of the views looking out. So, for example, students exercising on the third-floor fitness suite look out over
the treetops.”

Transparency into the building from outside is just as important. The glazing around the main approach allows people arriving at the complex to see people running up and down the sprint track, exercising in the fitness suite and scaling the climbing wall.

As with other sports projects elsewhere, which include Lord’s Cricket Ground
and London 2012 water polo venue, David Morley consulted with sporting governing bodies so that spaces were designed to be compliant with recommended standards. Accessibility is ensured with internal spaces and circulation routes designed using Sport England Accessible Sports Facilities guidelines.

However, engaging with suppliers like Continental Sports, which provided equipment for the main sports hall, was also important. Roberts says: “They had a design role helped us with things like the coordination of fixture and fittings – everything from line markings and sockets for posts to roof fittings like drop-down basketball hoops and court division nets.”

But it will be more than just a sports venue – the main hall being used for fresher fairs, exams and graduation ceremonies. For the latter, special acoustic treatments were applied to ensure the intelligibility of sound from a PA system in a building of such volume.

As part of meeting the sustainability aims early design plans were redrawn to avoid felling ancient oak trees on the site, and the main contractor was able to divert 97 per cent of the construction waste from landfill.

Although David Morley first became involved in the project design back in 2013, construction began in March 2015, and the building was only completed last autumn. During this period, the university used a £2m temporary sports building.

However, despite the relatively lengthy delivery, Roberts says he is delighted to have been involved with the project:

“I was a sportsman before I became an architect so it’s great to get the opportunity to give back by helping to design a sports facility of this standard – and it’s very rewarding to see it being used.” 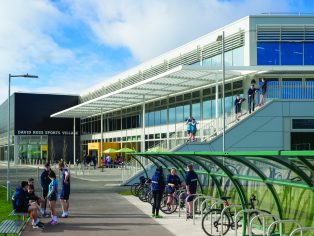