Part of the swathes of land being revived by the the King’s Cross regeneration, Four Pancras Square is a steel giant which conjures up memories of London’s industrial heartland. Steve Menary reports.

Replicating rusty metal might not seem an obvious design approach but that is one of the key design .features at Four Pancras Square, which forms part of the multi-billion pound regeneration of King’s Cross.

Until the relocation of the Eurostar rail terminal to Saint Pancras in 2007, the 67-acre site was an industrial wasteland dominated by a Victorian gas tower. Now such is the scale of the transformation that a new post code – N1C – has been assigned to the site.

This regeneration has seen the University of Arts London relocate to King’s Cross, while 2,000 new homes will be built and 20 historic buildings are being restored.

The development is by Argent King’s Cross Central Limited Partnership, which comprises Argent, EC Harris, Eurostar, Grant Thornton, Google and HS1 among others,  but the design has been led by Argent.

“Argent like to have named architects to design the buildings as it mixes up the design and you don’t have a repetitive design across the site.”

The ‘named’ architect on Four Pancras Square was Eric Parry, who drew up the concept design that has been taken on by BAM Design and is being built out by BAM Construct.

“Eric Parry’s concept was to link back to the industrial age,” adds Mr Walsh.

Four Pancras Square is one of nine buildings set to provide two million square feet of office space being developed by Argent. It also reflects the site’s industrial past through the specification of a weathering steel frame, the key external design feature.

“It’s an exoskeleton and the structural frame is on the outside of the cladding line,” explains Mike Hayes, structural associate at post planning lead design consultant, BAM Design. “Argent wanted a steel frame that you could see.”

A masterplan for the site was drawn up by two architectural practices, Allies & Morrison and Porphyrios, with Argent then choosing different architects for individual buildings.

Other buildings on the site also provide links to the past with non-structural cast iron columns specified by David Chipperfield Architects on One Pancras Square. These utilise tubular cladding over the columns but on Four Pancras Square the use of metal was both structural and decorative.

In a short film made by his practice about the project, Eric Parry says:

“Thinking about this building, it became in my mind a way of drawing a building to the context that spoke to the continuity and the future but also back to the remnants…of the Victorian industrial heritage.

“The idea was to build an external frame that would structurally support the building and that would have something of that gasometer scaling, and then as it came to the ground it should be liberating in terms of its future use.”

Subcontractor Severfield is providing around 1900 tonnes of steel on the project. This includes the steel exoskeleton which incorporates a Vierendeel truss that runs around the perimeter of the building and provides a more open column grid at ground floor (with spans up to 27 m). The truss sections weigh up to 72 tonnes each and were individually transported from their fabrication plant near Wigan down the motorway on tiltframes.

Installation of each truss has been such a major element for the construction team that each truss is delivered under escort with only one delivery allowed to site per day.

A 500-tonne mobile crane was needed to install the trusses, which can impose up to 165 tonnes of weight bearing on the crane’s outrigger.

Hayes describes one of the key practical benefits of an exposed weathering steel frame:

“Weathering steel is maintenance free. You don’t need to paint it with corrosion protection, as a small amount of elements including chromium copper and nickel are added to the carbon steel, so rusting does take place in wet and dry cycles but it doesn’t flake; you just get a stable layer.”

This is taken into consideration in the structural design put together by BAM Design.

“On an 80 mm section, you’d design it for 77 mm and ignore the outer layer from a structural point of view,” adds Hayes.

The design also specified an exposed Vierendeel truss formed with rectangular openings, between the first and second floor slab levels.

“I proposed a steel belt which would go right the way around the first floor level of the building. The principle in the square ­– that rises quite dramatically towards the building – is that public space should be able to slip underneath the building under this enormous beam.”

The Vierendeel truss acts as a massive transfer structure, supporting the 10 upper floors but with an exoskeleton design also poses issues for the construction team. Hayes explains:

“It’s outside the building so there’s thermal considerations as it will expand and contract.”

The design takes into account the impact of a possible change in temperature from 42°C down to as low as -22°C, which the design team estimate will produce movement of between 22 mm and 26 mm.

The decision to use the steel frame as a design element also caused issues with fire protection, and specialist consultants Trenton Fire were recruited to carry out a detailed study.

“We couldn’t paint it,” says Hayes, “so all the columns above truss level are concrete-filled to provide fire protection, and at truss level there are sacrificial steel plates.”

“That also harks back to the industrial age, and allows for easy cleaning.”

The brise soleil are used externally at the upper levels to provide solar shading to the facade. The bulk of the facade comprises glass and patinated steel spandrels reflecting the rich colour and heritage of the site. To achieve this look, Focchi has supplied glazed curtain walling. “In configuring the space and the building in this case, the aesthetics of the

Externally, steel balconies have been specified at

intermittent floors on the north and south to provide outdoor space. Steel rods hung from the slab soffit above support these balconies structurally.

The design and construction is aiming for a minimum rating of ‘outstanding’ under the BREEAM 2014 scheme, which monitors environmental performance. The design includes the specification of the latest technology to reduce running costs and minimise environmental impact with the building linked to a site-wide district heating network.

Other aspects of the design that contribute to energy efficiency include orientation and solar shading, thermal mass for cooling and passive ventilation systems.

Beyond nine to five

Plans for Four Pancras Square were submitted to the London Borough of Camden in November 2014 and received approval in February 2015. BAM Construct began clearing the site in advance of this allowing piling to start in March.

When completed in June 2017, the project will provide 170,000 net ft2 of shell and core space over 10 floors with floor plates of 20,500 ft2. The ground level will be allocated to retail, while the 10 floors of offices have all been let to international music company Universal Music, the latest in a host of big names moving to the site, such as Louis Vuitton and global communications group Havas.

BAM Construct has delivered four of the nine office buildings within the overall Argent regeneration and each one features either retail or restaurant space on the ground floor.

“The whole emphasis is that it’s not a nine-to-five building,” says Walsh. “There’s cafes and restaurants with seating outside so at ten or eleven at night there’s lots going on.”

Towering above the building on the top floor of Four Pancras Square is a roof garden featuring a landscaped terrace, raised timber decking, water pools and rocks.

Below ground there is a service basement beneath Pancras Square that is big enough for articulated lorries and means no deliveries need to be made above ground.

The overall King’s Cross regeneration project is due for completion by 2020. After shell and core completion next summer the 174,570 ft² Four Pancras Square building will  be a functioning part of this new community, and following its fit-out will be operational by 2018. 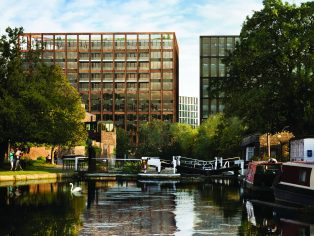 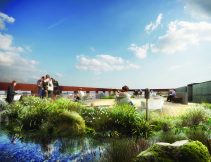