The main contractor, Cocksedge, approached Selectaglaze, the UK’s leading provider of secondary glazing, for advice and assistance. The primary windows were draughty, allowing heat to escape and suffered from noise ingress and egress. The secondary glazing had to be considerate with regard to the architectural heritage of Jesus College.

Selectaglaze had previously worked on the College’s Chapel Court student accommodation refurbishment, where it treated over 300 openings. Selectaglaze subsequently installed over 100 secondary glazing units in West Court. It was important that the secondary glazing did not detract from the original primary windows – iron casements set into stone mullions. A combination of casements and horizontal sliders matched the original design to avoid the introduction of new sightlines. Finished in anodised bronze, they complement the overall feel of the building.

The College hopes to reduce its annual energy costs as a result of Selectaglaze’s work. Those staying there have found the accommodation to be far more peaceful, with little or no distraction coming from the outside.

Secondary glazing traps an insulating layer of air, which can reduce heat loss by 50%. With the introduction of low emissivity glass, U-values of around 1.8 can be achieved. High performance twin seals help to virtually eradicate draughts. Furthermore, noise ingress is significantly reduced. A gap between the primary and secondary glazing of at least 100mm achieves  a reduction of 45dB – rising to more than 50dB if specialist acoustic glass is specified.

Established in 1966, and a Royal Warrant Holder since 2004, Selectaglaze is the leading specialist in the application of secondary glazing for all building types, from Listed universities to new build offices, working closely with clients to meet their requirements. 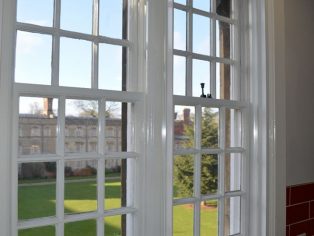