Newcastle based property specialist, All Saints Living, is undertaking a prestigious project, which will change the Tyneside skyline.

The development of Newcastle’s tallest building – Hadrian’s Tower – in Rutherford Street, off St James’ Boulevard, will create an 82 metres, 26 storey structure which is acknowledged by planners to have an elegant, landmark architectural style.

When completed, the £46 million tower will deliver 162 private rented sector (PRS) apartments, providing homes for up to 456 people.

Constructed on a formerly occupied by a semi-derelict warehouse, the masonry and glazing façade at the lower levels will blend with the existing streetscape and reflect the grade II listed print works building opposite.

At the upper levels, a more vertical style, with steps and cantilevers, will make a real architectural statement. Public viewing from the rooftop – offering panoramic views of the city and even as far as the coast – will be available 18 times each year.

Other projects in the pipeline from the group include two Birmingham city centre PRS projects and four more in Manchester, Salford, Warrington and Milton Keynes.

In total these ventures represent 1,666 units with a gross development value of £340 million. With a further three prospects, being seriously considered, The High Street Group’s investment in PRS is expected to sire to more than £600 million – creating almost 3,000 apartments.

With its headquarters in Cuthbert House, Newcastle, The High Street Group was established by successful entrepreneur Gary Forrest in 2004. It has grown to become a leading financial and property group employing over 100 people in activities including large-scale property development and construction, hospitality and leisure. 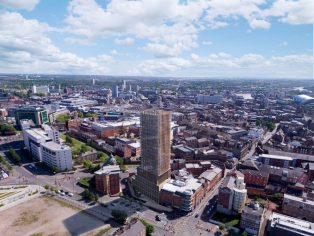 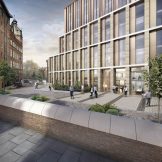 The masonry and glazing façade at the lower level will blendwith the existing streetscape. 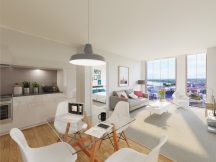 A computer generated image, showing the style and look of the planned apartments.