A former concert hall on a site once considered for the headquarters of the BBC has been transformed into high-end office use with Crittall windows supplying much of the fenestration.

Built in 1908 the building first housed a series of promenade concerts and, subsequently, became a cinema showing mainly travel films. In 1927 it was one of a number of sites considered by the BBC for the construction of its new headquarters that, in the event, were eventually built close by – the iconic Broadcasting House.

The Philharmonic Hall was used, during World War Two, as the home of the BBC Radio drama department, then a mechanical workshop and, finally, offices before being vacated by the Corporation in 2018.

It was then acquired by The Office Group and a complete transformation internally and externally was completed with a two-storey mansard roof extension added. The site covers 28,000 sq. ft. of space.

This is one of very few central London office locations on an island site allowing natural light to penetrate from every elevation, a fact that is enhanced by the slender steel frames of the Crittall windows. 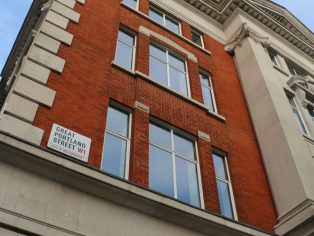 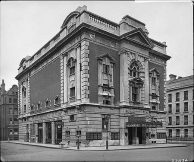