From the stuffed deer in the conservatory to a copper studded, Northern Lights-inspired rooftop lounge and old school desks surrounded by walls pasted with Shakespeare quotes, it’s clear iQ Shoreditch is student accommodation like no other.

Not only have the 24 common rooms and public spaces here been intelligently created by celebrity interior designer, Naomi Cleaver, this state-of-the-art development is the first of its kind for developer, Quintain.

The company, behind the nationwide iQ student accommodation provider, are aiming to set a new standard of student quarters in the capital, driven by fierce competition in the sector and demands from increasingly discerning international students.

“We are setting a new baseline for quality student accommodation within central London,” said developer James Crow. And to do so, he drafted in the help of Naomi, made famous for presenting many of Channel 4’s ratings-busting, home interest shows such as “Honey, I Ruined the House” and “Grand Designs: Trade Secrets”.

“There have been numerous new entrants into the student accommodation market in recent years, with the quality of the products now available increasing with the greater levels of competition, but this is also being driven by students’ expectations and the willingness for some students to pay for higher levels of quality and amenity, particularly the international market,” he said.

To give the development that extra edge in the market, Naomi was commissioned to bring a “fresh” take to the development, maximising a “blank canvas brief” to draw the trendy Shoreditch factor from the outside in.

“Naomi demonstrated genuine enthusiasm and excitement for the project and maximised the blank canvas brief we gave her to capture the ‘Shoreditch factor’ within the building,” said James.

The location remains key here, including the peculiarly maverick spirit of Shoreditch and its associations with celebrated “YBAs”. The building also sits in the thick of the city in Zone 1 with excellent transport links, including Old Street tube station and several bus routes on the doorstep; a location which played an important role in inspiring Naomi’s designs.

“Our strategy was to celebrate the famously vibrant character of the location as well as creating a sense of home for a community of students from across the world,” said Naomi.

Naomi was involved in deciding on the use, as well as the look and feel of the rooms and commissioned young designers and artists to realise some of her ideas, which were inspired by flight paths above London, traditional Oxbridge colleges, the confessional and the shed to astronomy and primitivism.

“We were briefed, I made a series of presentations for sign off, and then we organised ourselves to complete works in a limited timescale which meant ordering everything and putting it into storage in one of my buildings in Devon.

“When the time came we shipped everything up and I have a brilliant project manager who oversaw the bulk of the implementation while I actually moved into the building during the last week to oversee final details,” she said.

Naomi had only five weeks on-site to implement her schemes. But her experience as a Channel 4 presenter equipped her well for the challenge.

“Working to the limited budgets and crazy time schedules of the television shows I have worked on certainly gave me an edge in this project and it was one of the most satisfying projects for me to do because, while the budget was limited and the timescale even more so, my client gave me the liberty to be very conceptual. I like design that makes sense of ideas.”

Examples of where the context provided inspiration for Naomi abound here at iQ Shoreditch. The 12th floor common room, the Star Lounge, features a depiction of the accumulation of flight paths across London during 24 hours in string art, where what you see out of the window at that height is brought inside.

The “visual anarchy” of Shoreditch inspired the scheme for the main common room, a subverted Oxbridge or Ivy League University Common Room, while the “pavementscape” designed by local architects Tonkin Lui was the reference point for the Reception area, which neatly ties into some of the motifs designed by the architects Lifschutz Davidson Sandilands, such as green walls in the adjacent courtyard.

“As the brief required the location of computer monitors in the Reception I designed pods made out of brass grille, the type that sits in front of radiators, inspired by the privacy of the confessional and the phone booth.

“I was also keen to develop both the language of learning and the idea of just being young. The Study Rooms for example are furnished with desks and chairs reclaimed from a Manchester college and papered with misprinted sheets of a Shakespeare play,” said Naomi.

The television rooms are papered with murals and furnished with bean bags.

“And then there is the role of whimsy,” added Naomi. “For the Games Rooms I conceived an inside out shed, lining the walls with waney-edged boards. And for what’s called The Link, a space adjacent to the Main Common Room, I continued the idea of the subversion of tradition as well as inside-outside space to create a modern conservatory, complete with hanging baskets and a stuffed deer.”

From antique leather sofas and chairs, layered Persian carpets and dining tables made out of reclaimed scaffolding planks, plus computer counters made from reclaimed lab tops and table-tops made from recycled yoghurt pots, 100% of the materials used in implementing Naomi’s designs at iQ Shoreditch were either reclaimed or environmentally sustainable.

“Resourcefulness is key to my practice, as is UK manufacture, where possible,” said Naomi, who commissioned Stuart Scott in Wiltshire to make the circular leather seating in the Reception; British design team Hendzel and Hunt to produce panelling and fireplaces in the main common room from reclaimed hardwoods; Debbie Smyth to make string art; Oval Workshops to build the zinc and hazel bar in The Link; and in the meeting room Naomi designed a table which could be split apart to create individual “stations” or wheeled together to make one large table, which was made in the Cotswolds by Forgeability, with the tops made out of recycled yoghurt pots.

The concept of “home” also played an important part in Naomi’s designs: “Student Accommodation is as much an expression of home as anywhere else but much of the student accommodation I had researched looked corporate to me. While security and efficiency are important so is nurture and play.

“And so is the fact that students study very different subjects. I designed an Art Room with large tables for art, fashion and design students to work on, with the walls lined with pinboard material and a music room which one music student has told us is the best practice room in any educational building in London.”

For Naomi, what really sets iQ Shoreditch apart however is the 12th floor common room and its specially commission original wall art: “I love the chance to commission art from a young artist. It is a cherished opportunity,” said Naomi.

For the developer: “If I were a student, I’d be drawn to live here by the location, combined with the quality of product and service in a fun and exciting setting,” said James.

“The variety and quantum of common and social spaces for the students to congregate and socialise in is also unusual for student accommodation.”

For student, Amani Soboh: “I love the television lounge on my floor. When my friends come here I take them to every single common room and we go up to the 12th floor and come down the stairs. They are always shocked and say “it’s pretty much the best student accommodation I think I’ve seen.” 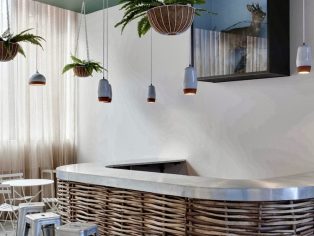