30 Euston Square is a stunning Grade II* Listed building dating back to 1906. It has a grand Victorian façade with an original Greek revival style entrance hall and internally is full of ornate architectural details. Maintaining the legacy of the health related professionals who have occupied the building since it was constructed; in 2010 it was acquired by the Royal College of General Practitioners (RCGP).

Selectaglaze has a long standing relationship with RCGP and has carried out a number of installations to different areas of the building over the years. The relationship began in 2010, when the new owners decided it was necessary to undertake works to reduce noise ingress on the façade overlooking the Euston Road. To make it more attractive for the users of the space, it was decided to treat them with secondary glazing.

On a few of the lower floors there are study rooms where GP members can stay when they are on College business. Secondary glazing has been installed to prevent noise from passing traffic. These rooms required optimum noise reduction to enable complete concentration for students who were near to gaining their medical qualifications. A mixture of units was installed, including vertical and horizontal sliding units and side hung casements.

In 2012/2013, Selectaglaze returned to install secondary glazing to other areas of the building, which were either used for RCGP staff or as tenanted office areas. These were mainly overlooking Euston Square and a few of the study bedrooms towards the rear of the building.

Secondary glazing is one of the most effective methods of reducing noise ingress. If a cavity of 150mm from the primary glazing can be achieved and acoustic laminate glass used, then a reduction of over 48dB can be reached. In addition, thermal insulation is increased and prevents the spread of dust and dirt.

With works in the surrounding area due to finish in 2026 – the projected date for the opening of the new terminus, the occupants should feel a difference; with a nice quiet environment where they can sleep well, concentrate and hear themselves think. 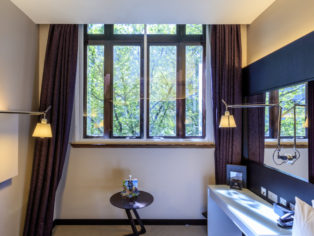