Corn Exchange Manchester will be transformed into one of the UK’s biggest and best dining destinations according to new plans revealed by the buildings owner’s, Aviva Investors.

The historic Grade II listed building is set to become home to a collection of the best new and independent restaurants and food retail outlets in the region.

Its location means the redevelopment should also help physically connect the numerous new developments taking place in the north of the city with the centre’s existing commercial and retail heart.

Built in 1897, Corn Exchange has not made the most of its potential since it re-opened as The Triangle in 2000, following its major post-bomb refurbishment. However, the owners’ new vision for it as a food destination, heritage attraction and stepping stone to adjoining sectors of the city centre promises to breathe new life into this iconic building.

The vision sees a total transformation of the interior of the building exposing the most beautiful elements of its fantastic Edwardian architecture as well as opening up the considerable space, recreating the bustling feel of a cosmopolitan European city square indoors. In order to realize this vision there is a substantial reconfiguration of the existing retail units planned.

The surrounding streetscape will also benefit from the new vision – with tables and chairs transforming Exchange Square, Cathedral Gardens, Cathedral Street and Fennel Street into an al fresco-dining destination. The planned development will marry together the best of the medieval charm of the Cathedral with its modern neighbour The National Football Museum at Urbis.

“We have ambitious plans for this incredible building – plans that are supported by a clear vision.

“Subject to achieving Planning and Listed building consent, it is anticipated that the new scheme will be completed late 2014 following considerable and considerate refurbishment. We are committed giving Corn Exchange the future it deserves.”

Aviva Investors has appointed experienced redevelopment experts Queensberry Real Estate to oversee the project. The Queensberry team previously worked successfully on the redevelopment of SouthGate in Bath, including the refurbishment of Bath’s Grade 2* listed Railway Station. 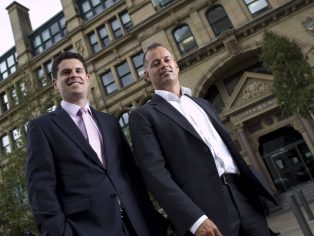