NCH raises a tree to celebrate Palmer Court topping out

Nottingham City Homes is celebrating the development of an Independent Living block reaching its apogee with a traditional ‘topping out’ ceremony – by placing a tree on the highest point of the building.

Currently under construction, in the footprint of the former Lenton Court, is the new Independent Living scheme for older residents, Palmer Court. The 54 flats are being constructed by regeneration specialists, Keepmoat as part of the city’s Building a Better Nottingham scheme and will be completed by Spring 2015.

As the roof section of the construction is now nearing completion, Keepmoat are craning in a mini oak tree which will be placed on the roof to mark this stage in the project. After the topping out ceremony, the tree will be retained and planted within the communal garden area which is being planned for Palmer Court.

The topping out tradition can be traced back to Viking times, with the earliest references dating from around 700 A.D, when Scandinavians topped off the construction of new halls with sheathes of grain. This ceremony was carried out to bestow good luck on the future occupants and is a tradition that quickly spread across Europe.

Bringing the tradition back to life, with a modern twist, Nottingham City Homes wanted to ensure the Scandinavian tradition had a local feel, with the use of a miniature oak tree.

“Seeing the roof nearing completion on Palmer Court marks an exciting stage in the programme and we wanted to make sure we marked the occasion with a memorable ceremony. Traditionally a pine tree would have been used but we felt a miniature oak was more appropriate to Nottingham and this project.”

Mrs June Roberts was one of the residents to be given a preview tour of the building:

“I was blown away by the whole thing. Its a great design and I’m really happy that we have had the opportunity to look around today. I really do think that it will be a better way of living for us. We’ve been watching the construction for the last year and its been great to see the chaps on site working so hard and being so dedicated to what they do. I’m really happy with what’s being built.”

“It’s great to see Palmer Court topping out. This exciting scheme, which will create much-needed new homes for local people, is progressing quickly. We are delighted to be working with our partners to help transform their vision for Lenton into reality.”

The name Palmer was chosen by the residents of Newgate Court from shortlist developed by the Lenton History Society. The name relates to Ena May Palmer (1906-1998) who was a school teacher, local historian and conservationist who was often consulted on planning matters in the city. Ena Palmer helped to found the Lenton Local History Society and was received the Citizen of Honour Award from Nottingham City Council in 1994 for her environmental work.

The Lenton site which sits between Derby Road and Church Street will also include the construction of 16 bungalows, 10 flats and 62 family houses with three retail units. The Lenton development is due for completion in 2017. 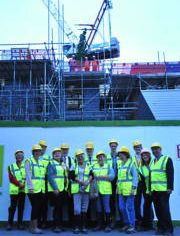 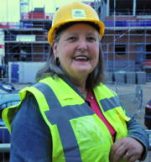