NCC to build rental units for Magnolia for SEK 450 million

NCC is to build a total of 401 rental units for Magnolia Bostads AB. One of the housing projects comprises 268 apartments in Norrköping and the second is for 133 apartments in Kungsängen, Upplands Bro. The total order value is approximately SEK 450 million.

In Norrköping, the rental units are to be built close to the soccer arena of IFK Norrköping. The buildings are being built according to NCC’s Folkboende and P303 proprietary concepts, which are affordable apartments characterized by good quality and design, as well as low energy consumption.

The area will be close to public transport, in the form of bus and tram lines, and be within cycling and walking distance of Norrköping Centre.

The rental apartments in Kungsängen, Upplands Bro, are being built according to the Folkboende concept, in the form of individual point blocks. The units will be space efficient and have low energy consumption.

Construction is scheduled to start in December 2014 and the first apartments are expected to be ready for occupancy in April 2016.

The total order value will be registered during the fourth quarter in the NCC Construction Sweden business area. 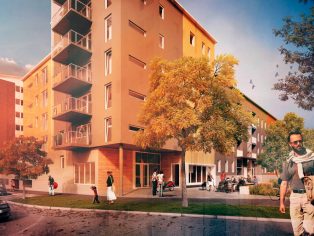