The arrival of three marine barges in the Mersey estuary heralds a new phase in the construction of the Mersey Gateway Bridge.

The marine equipment, which includes the 410ft Harry McGill tower crane barge, arrived in the estuary in convoy after travelling up the River Mersey from the Liverpool Docks.

The barges are being used to build temporary structures known as cofferdams, to enable work to begin on the construction of the pylons that will support the three towers of the 1,000m long cable-stay bridge.

Cofferdams create temporary watertight enclosures in bodies of water when construction needs to take place below water level. Merseylink is installing three cofferdams in the estuary – one for each bridge pylon – with work already underway on the south cofferdam.

Once built, water will be pumped out and the outer areas infilled with local natural materials, such as stone or sand, to create a dry environment. This will allow workers to access the site and begin the necessary excavation and construction works.

It is expected to take around 30 days to build each of the three cofferdams. They will be visible in the river for the duration of the three-and-a-half-year construction project and removed once the work is complete.

Construction of the temporary trestle bridge, which began on Wigg Island, is now underway at Spike Island on the north side of the river. The trestle bridge will provide construction vehicles, equipment and workers with access to the cofferdams.

“This is a major step in the development of the Mersey Gateway Bridge. Work on the cofferdams is a crucial part of the construction process, enabling our expert teams to access the estuary so they can begin to build the necessary support structures for the new bridge.”

“When you look at the estuary it is clear that our new bridge is becoming a reality. It’s important to remember that this iconic project will bring so many benefits to the people of Halton in the long-term, reducing traffic congestion, improving community links, generating employment opportunities and bringing inward investment to our borough and the region as a whole.”

The economic, transport and social benefits that the Mersey Gateway Project will bring to the region include:

When it opens in 2017, both the new bridge and the Silver Jubilee Bridge will be tolled, but they will be free to all residents. 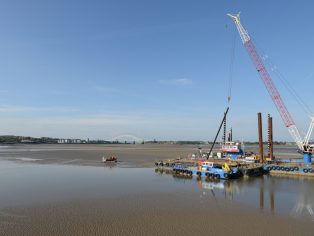