Manchester set to append ahead on new national stadium

For a sport that regularly attracts thousands of fans to meets every week, speedway has precious little history in terms of stadia and certainly no purpose-built grounds with any level of good quality design.

Speedway has a long history in this country and often attracted bumper crowds, but all too often these have been to grounds built for other sports. The Millennium Stadium in Cardiff, better known for rugby union, first staged a major speedway race in 2001 but the sport’s association with major venues goes back much further.

The famous White City Stadium in West London that was built for the 1908 Olympic Games hosted the now defunct White City Rebels from 1976 to 1978. The Rebels folded due to poor crowds but another famous London stadium, Wembley, was attracting attendances of 80,000 for speedway meets after World War Two.

The period of 1946 to 1949 was a halcyon period for the sport and attendances have declined since. But speedway remains a well-watched staple of Sky Television and The Voice magazine estimates that more than 40,000 people a week still go to watch meets from Eastbourne to Manchester every week.

For all its enduring popularity, speedway has never had its own national stadium but that could all finally change if, as scheduled, work on the proposed new £10 million Belle Vue Sports Village finally gets underway this spring.

The project, which has been in the pipeline for a number of years, has been put together by Manchester City Council and will include a national home for not just speedway but also English basketball. And for AFL, the experienced sports architects on the project, the design commission brings a major challenge not just to create a home for this rootless sport, but to finally introduce some iconic architecture into a sport with stadia lacking any architectural flair.

Right from speedway’s early days the sport was usually staged at existing greyhound stadiums, such as Haringey, New Cross and Wimbledon in London. Today, speedway and greyhound racing are frequently staged at the same grounds across the country from Poole to Swindon, but there is little design of note.

Over the years, speedway teams also shared a home with a number of football clubs from Chelsea’s Stamford Bridge to the likes of the Shay in Halifax and the old Eastville Stadium, which housed Bristol Rovers Football Club and the Bulldogs speedway team.

While some of these football grounds can boast of famous architects such as Archibald Leach, who produced a notable style and form in that game, speedway has no track record because there are so few speedway-only stadia.

Author Simon Inglis documented Leach’s life in Engineering Archie: Archibald Leitch – Football Ground Designer and has studied the history of speedway stadia. He says: “Lea Bridge in east London was a speedway only stadium, but honestly, it was so basic that it can hardly be described as a designed venue. Like so many, it was really just a track with outbuildings.

“The only pre-war speedway-only stadiums I can think of that were designed specifically for the sport and that could be described as having some sort of master-plan with designed stands are Brandon Stadium in Coventry, built in 1928, and Owlerton, which is now greyhounds only and built in 1929.”

West Ham’s stadium was purpose built for both greyhounds and speedway from the beginning and Inglis has identified a total of 17 speedway tracks in London, but most are now memories. Hackney Wick closed in 1996 and speedway finished at Wimbledon in 2005, although the ground still stages greyhound. The rest are closed.

Inglis publishes the Made in… series of books documenting Britain’s sporting venues but will not be putting one out on speedway, adding: “We did consider a book on speedway and or greyhounds but the paucity of good design ruled it out.”

That is what makes the challenge facing AFL in Manchester so great.

Manchester’s speedway team is the Belle Vue Aces, whose home in 1929 was a development of an existing athletics and football ground. Today, the Aces share a stadium not only with greyhounds but also stock car racing. As a result, the Aces have to stage speedway on a Monday night as that is the only free slot and negotiations between the club and the council over a new home have been ongoing since 2006.

Building a speedway-only national stadium was clearly unrealistic and the Aces will be the regular tenants on the track. The overall speedway proposal is for a purpose-built 6,500 capacity speedway venue comprising a 2,500 seat grandstand with executive seats, and a standing terrace accommodating 4,000.

The track’s facilities would also incorporate a workshop, 24 pits for the bikes, changing facilities, a function room capable of holding 250 people and including a bar, terrace, kitchens and a press room for 30 media representatives.

The design must include the potential to add temporary seating for larger events, so that Manchester can bid for major international speedway events. The sport is massively popular in Eastern Europe, where major races can attract attendances of 80,000 and this has proved attractive for promoters.

In Britain, main events this year will be the 2014 British FIM Speedway Grand Prix to be staged on July 12 at the Millennium Stadium and the individual Monster Energy FIM Speedway World Cup on July 26, which King’s Lynn has rights to host. The Aces and the city council want a ground capable of hosting this type of event and a design to reflect this.

The brief from the council is for a track that must be “the first of its kind in the country – able to host not only national race meets, but as one of the best tracks in Europe. The new stadium will give one of Manchester’s most historic sporting teams the opportunity to compete at the highest standard, while opening the lucrative weekend race meets, strengthening the earning potential of the club.”

The council want the stadium to set the standard for the British Elite League and envisage crowds of between 50,000 and 80,000 visiting the track each year. These will come not just through higher attendances from Aces’ meets but new international events.

The British Speedway Promoters Association (BSPA) have agreed with the council and the Aces that the new ground would be designated a national stadium and the sport’s world governing body, the Fédération Internationale de Motocyclisme, have agreed a “willingness” to stage international events there.

Renowned sports architects Populous were initially brought on board and put together a basic design with an estimate that the speedway element would cost £4.5 million to build. The Aces are the only Elite League team in the North West but attendances for meets are between 1,000 and 1,100. The club envisage that these could grow to between 1,800 and 2,500 at a new ground, but even that would not cover the build cost. So the city council has agreed to fund the £4.5 million with a loan that will be repaid by the Aces though an annual rent as part of the club’s 60-year lease agreement.

The entire proposal forms part of the council’s Eastlands Community Plan and the speedway track will also host a new National Speedway Academy aimed at making Manchester a centre of excellence and also to encourage grass roots development of new local speedway talent.

Traditionally, speedway stadia have also often featured other sports in the space in the centre of the track but this has gradually died out. Bristol Rovers left Eastville in 1986 and a dozen years later the track was demolished, while the Poole Town were unceremoniously kicked out of the south coast resort’s greyhound and speedway stadium two decades ago.

Since then, the track footprint has been expanded to such an extent that the prospect of Poole Town returning would be difficult, but AFL’s design in Manchester must include a grass rugby league pitch, for use by St Peter’s High School and the wider community.

AFL have been brought on board as the project architects, but with a planning application due to come before the local committee in the coming months, the practice are reluctant to discuss individual aspects of the design that may subsequently change.

However, a contractor has been brought on board with ISG, the company that built the velodrome for the 2012 Olympic Games in London, recruited by the council.

“Every milestone towards Belle Vue Sports Village is a step closer to realising the potential of this area,” said councillor Nigel Murphy, the city council’s executive member for planning and Regeneration, after ISG’s appointment. “Of course there is still some way to go – planning and beyond – but we welcome the experience of ISG to deliver the development in the future.”

AFL’s designers are busy on the plans and the design proposals due to be unveiled any day, speedway fans will soon find out the exact details of what the sport’s first proper, purpose-built home will look like. With so little track record, AFL’s design can only be an improvement but the practice, the Aces and the council will surely all have higher aspirations. 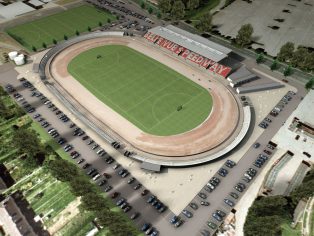 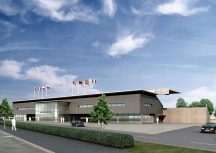 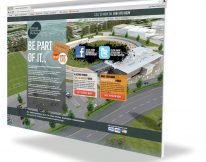