Knight Property Group has today received planning consent for its plans to develop the Capitol Theatre in the heart of the city.

Aberdeen City Council approved the plans, which total an investment value of £30million and are set to breathe new life into the historic landmark building on Union Street.

“This is fantastic news, not just for Knight Property Group, but for Aberdeen as a city. Now, we can look forward to restoring and redeveloping this iconic building and breathe some life back into the city centre and west end of Union Street.

“I firmly believe that we need to offer companies the best commercial property options, otherwise we are in danger of these businesses setting up bases and making investments elsewhere.

“On completion, the office space will house up to 700 people and will go towards meeting the current demand for prime office space in the city centre. By offering businesses high quality options in Aberdeen, this is a real win-win situation for all involved. Local retailers and suppliers in the area can benefit from greater footfall and transforming units which were empty and in decline will kick start the regeneration of Union Street and help it become an attractive location for businesses to set up and grow.”

Following today’s decision, work will begin immediately on the listed building, which dates back to 1933, for a 2015 completion. Over this 18 month period, the Capitol will be redeveloped to create prime office space covering approximately 70,000 square feet. James continued:

“We have consulted with Historic Scotland during the planning process to ensure that many of the original art deco features within the building are retained and restored. As part of this, we are also working with the Aberdeen Theatre Organ Trust to remove the original Compton Organ carefully, piece by piece, so that it can be recovered, re-homed and displayed to the public at an Aberdeen location.”

As part of the redevelopment, the property developer will install an escalator to link the refurbished art deco front of house with the new build office development to the rear designed to incorporate stonework, glass and curtain walling. The exterior of the building will be restored, paying specific attention to the Union Street frontage of the building and restoration of the former canopy.

The building is being developed on a speculative basis and is set to be the largest city centre new build office space under construction. The space can be tailored to accommodate individual business requirements, from 5,000 sq ft up to 70,000 sq ft.

The Capitol was among the first British cinemas in the Moderne style and was considered to be Aberdeen’s most prestigious and luxurious venue. The innovative design was heavily influenced by contemporary European cinemas and theatres, such as the Savoy in London. The theatre hosted annual pantomime seasons, regular live shows and concerts. More recently, the building was a bar and a nightclub and during the works required to operate the bar the auditorium seating was removed and much of what formed the Capitol was no longer in place but Knight’s plans involve the restoration and refurbishment of the retained structures to the front of house including what was the former tea room.

In the last 24 months, Knight Property Group has developed in excess of 300,000 sq ft of commercial space across Aberdeen City and Shire, with a further 265,000 sq feet planned in the next 18 months. 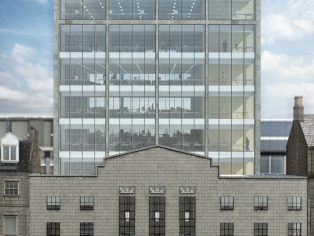