Nestling on the border of Dorset and Hampshire, sitting atop the cliffs at Highcliffe; is the Grade I Listed Highcliffe castle. It stayed a family home until the early 1950s when it was sold to become a children’s convalescent home, but was closed in 1952. In 1966, prior to the Castle being sold for redevelopment, a fire damaged much of the exterior. Another fire a year after the sale left it to ruin. It was not until 1994, that the phased scheme (which is still ongoing) to repair and conserve the building began.

As part of the 18-month building project, Greendale Construction contacted Selectaglaze, the leading specialist in the design, manufacture and installation of secondary glazing for thermal and security solutions for the castle’s new exhibition spaces. This first required an overhaul of previously repaired windows as well as the conservation of existing exposed brickwork.

Working closely with Greendale and architects Rodney Melville and Partners; Selectaglaze provided the Castle with a bespoke solution to compliment the restoration of the rooms meeting acceptable museum standards and levels of; humidity, light and security. This will allow the return of most of the Marshal Ney furniture which is currently in the V&A Museum where Selectaglaze previously installed secondary glazing units in the Henry Cole Wing. As the castle is Listed, any security measures taken had to be sympathetic to the building’s elegance and historical significance. As secondary glazing is a discreet and reversible adaptation, it is ideal for Listed properties and can provide an unseen level of security to any property.

“We enjoyed working with Selectaglaze on the Highcliffe project and are impressed with their service and security products.” 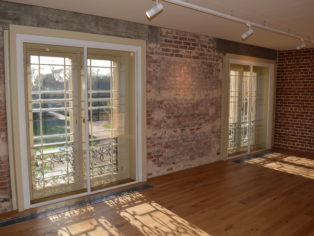