Landscape architect Grant Associates has received an award from the Earth Champions Foundation for its contribution to protecting the planet’s environment.

Grant Associates was awarded an Outstanding Earth Champions Award in the category of Built Environment by the initiative, which was created by the United Nations to recognise the local efforts of organisations to nurture the earth.

Bristol, Bath and North East Somerset are the current focus for the Earth Champions Quest that runs for a one year period in a specific geographic area to highlight the work of those striving to protect the environment.

Notable landscape design projects by Grant Associates in the region include the regeneration of Bristol’s historic Harbourside as part of a £120 million scheme for developer Crest Nicholson, and Wessex Water’s operations centre on the outskirts of Bath, which focussed on promoting the site’s delicate ecology.

In addition to commending Grant Associates’ designs for schemes in the Bath/Bristol area, the Outstanding Earth Champions Award also recognised the practice’s effort to connect to the community through local initiatives and events. These include ‘Forest of the Imagination’, which saw Grant Associates help transform Bath’s Queens Square into a temporary fantastical, tree-filled landscape and outdoor gallery as part of a four-day contemporary arts event in May 2015.

Key international projects, such as Gardens by the Bay in Singapore, have likewise given Grant Associates the opportunity to demonstrate the firm’s ethos of connecting people with nature.

The Earth Champion Awards are part of the Quest’s programme of events, workshops and celebrity appearances that aim to strengthen the connections, and share best practice, between organisations making a contribution to the environment.

Grant Associates was one of 127 organisations and individuals to be nominated by Bristol and Bath community members as Earth Champions, of which just 36 went on to receive an Outstanding award.

“It’s an honour to be recognised by the Earth Champions Foundation for our commitment to creating sustainable landscapes through well informed and innovative design in the Bristol and Bath area, and beyond.

“This award is made all the more special because it stems from nominations made by members of our local community.

“We believe whole-heartedly in the Earth Champions’ mission to demonstrate that the global environmental challenges we face need to be tackled at a local level as well as through national and international efforts.” 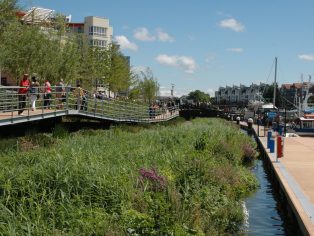