Next to Bellingham Station in London, the Fellowship Inn was Grade II Listed by Historic England in 2013, as an example of a complete inter-war public house. Despite the Listing, parts of the building excluding the pub area fell into a state of disrepair but have been rescued thanks to, the Electric Star Group, Phoenix Community Housing and the Heritage Lottery Fund.

The Bellingham space relaunched in June 2019 as the ‘Fellowship and Star’ and functions as a pub, microbrewery, cinema, theatre and comedy venue, music hub and rehearsal area. The pub will also be home to charity ‘Lewisham Music’, which provides after-school instrument tuition and rehearsals for the Borough’s schools on the first floor.

Given the vital repairs and conservation works the site was to undergo, it was necessary to improve the acoustic efficiency of the original crittal single glazed windows which could not be removed due to conservation restrictions.

Architect Thomas Ford and main contractor Ash Constructing contacted Selectaglaze, as an essential element of the works was to ensure a reduction of noise ingress and breakout from the building.

Selectaglaze installed a total of 32 units across all four floors of the Inn. The majority of the openings were fitted with Series 15 horizontal sliders, which is a mid-range horizontal sliding system with more robust but still slender framing sections allowing discreet treatments of larger windows. The original curved windows in the cinema were treated sympathetically, utilising Selectaglaze’s Series 15 units, combined with Series 40 curved fixed light units.

Near to an external staircase serving as a fire escape, Series 40 fixed lights offering 30 mins fire integrity were installed to protect the route in the case of an emergency. The Series 15 horizontal slider was specified for windows in the performance venue on the ground floor, the rehearsal and music production rooms. A Series 41 side hung casement was also installed to treat a small window in the rehearsal room.

Founded in 1966, Royal Warrant Holder Selectaglaze is the leading specialist in secondary glazing. 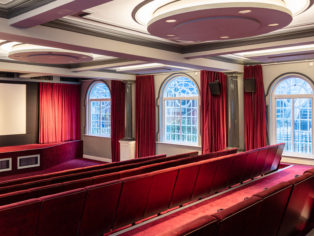