Eve and David Jervis travelled to Germany to find inspiration for their spacious, contemporary eco self-build in Yorkshire. Words by Heather Dixon, pictures by Feature Services

Eve and David Jervis didn’t know whether to celebrate or commiserate when they realised that the building plot they bid for at auction was actually theirs.

“It was quite surreal,” recalls David. “We felt a mixture of real excitement and that feeling of ‘what on earth have we done?’”

But any misgivings quickly vanished when they started to plan a house that would become the complete antithesis of their previous home.

“We lived for 10 years in a lovely modern apartment in a 100-year-old former girl’s school,” says David. “It had fabulous sea views and loads of character, but unfortunately it haemorrhaged energy.”

Although they had no experience of self- building, they were keen to build a house which was individual, ultra modern and as environmentally friendly as possible.

The three quarter acre plot in a village near Scarborough belonged to a local farmer, who had already been granted planning permission for a traditional dorma-bungalow. Eve and David knew they wanted something less conventional – a modern, eco-house with plenty of light and a spacious, open design – and Eve knew exactly where to look for inspiration.

She is from Germany, “where around 65 per cent of all new build properties are kit houses.” So the couple travelled to a specialist kit house site and factory called Fertighauswelt Wuppertal to study the options – initially favouring a timber-frame property with a large, open plan interior.

“We spent five hours there and learned so much,” says Eve.

“We hadn’t appreciated how much choice there was, not just in terms of the design of buildings but also in the eco elements. So we did lots of drawings to create a design which was unique to us – a house with plenty of natural light, big windows and open spaces.”

A year later, in 2010, planning was granted for their new design, which would be built on the same footprint as the proposed dorma bungalow. The build didn’t however begin until November 2013.

“We didn’t rush into the build straight away,” says Eve. “We were not working to a timescale – we wanted to do plenty of research and make sure we had a clear vision of what we wanted before we began. It was three years before we finally bit the bullet, sold our last home and moved into rented accommodation.”

“Renting was a good option because we had no idea how long the build would take,” says David. “Eve is a bit of a gypsy at heart so she had no problem with leaving our old place, and we both liked the idea of having a blank canvas to work with. We stored anything we wanted to keep in a friend’s garage and sold, or gave away, the rest.”

The plot is accessed via a long drive and has open fields to the back, but is situated on an incline. The block and beam foundations were dug into the slope, towards the rear boundary of the plot, with the aim of creating shelter to the back of the house and a bank of windows across the south-facing front to maximise the natural benefits of the sun as a heat source. The external block walls were built with a thermal layer and the property taken up to roof timber level in what was, at this stage, a fairly standard build.

“We didn’t want noisy stud walls inside so every internal wall is also built in block to create a solid, quiet home,” says Eve. “The first stage of the build was relatively straightforward, but we soon came to realise that we wanted a more contemporary look on the outside than the timber and tile roof exterior we had planning for.”

The build ground to a halt while they decided to go back to planning for permission to change the exterior to rendered walls and a metal roof. Eve also wanted opposing roof lines to create interesting angles and sharp lines – ideas which were given a cool reception by Scarborough Borough Council planning authority, who felt these modern materials would be out of keeping with the area. Eve and David argued their case, highlighting the wide range of build styles in neighbouring properties. Three months later their proposed changes were finally approved.

“We realised that a timber-led house would feature too much exposed wood and, although we love wood, I’m not Heidi,” Eve jokes. She continues: “Everything ground to a halt at roof level because we didn’t know what weight of tiles we were catering for. We had to cover the trusses with tarpaulin until a decision was made.”

They were glad that they had held onto their vision for a metal finish for the roof. It looks like slate, but reduces the weight of conventional tiles by around 70 per cent. The roof also features integrated photovoltaic roof lights.

Unfortunately the six-week lead time on the Profile 49 Britmet roofing panels caused a further delay, but eventually the property was made watertight and double glazed four metre windows were craned into place.

“There were three huge sheets of glass which had to be manoeuvred by six people into the openings,” says David. “The saving grace was good access and very understanding, supportive neighbours. It’s a private lane with shared responsibility for the upkeep, so we tried to cause the minimum disruption.”

One of the key elements of the property is a plant room at the back of the garage, with the lighting and heating systems all located together and easily accessible.

The property is kept at a steady all-year-round temperature of 23 degrees and there’s no condensation, as a result of having under floor heating, extra thick insulation, a heat recovery system and argon filled, triple-glazed windows.

“It’s very different to our previous home which had awful heat loss,” says David. “We have saved a huge amount just in electricity and heating alone. We did consider having a stove in the corner of the sitting room but we didn’t particularly want to lose the space and we felt we didn’t need the extra heating.”

They made further savings on the staircase which leads to a light, open plan mezzanine where David has his office.

The first quotes they had were around £30,000 for a design which included floating glass treads. Although they loved the design, they could not justify the expense. Rather than give up, they shopped around and eventually found a metalwork company, Strafford Fabrications, who came up with a design which, at £12,000, was less than half the original estimates.

“It certainly paid to do our research, rather than settle for the first thing we saw,” says David. “We had to compromise with the design – we initially asked for a half landing but to keep it level with the wall at the bottom it had to be a step landing, but it was a small price to pay to achieve something we are really pleased with.”

The house covers 150 m2 and according to Eve and David feels ‘even bigger’ because of the free flowing living spaces, ‘airiness’ and large amounts of natural light.

Eve and David chose not to have a stove in favour of more useable space, but the house is kept at a constant all-year-round temperature thanks to its eco-elements. They paid particular attention to detail such as mood lighting created in zones and sockets – well hidden to keep the look streamlined and modern.

“The renewable heating and high spec insulation means our home is one of the few EPCA officially rated properties in the UK,” says David. “There couldn’t be a bigger contrast between here and our last house.”

And if they were concerned about sacrificing their coastal views they needn’t have worried – the field to the back of the property changes with the seasons and from the mezzanine they have wide, open views across countryside.

“The key to this place is flexible living,” says Eve. “Although it is open plan, each living area is well defined. It’s practical as well as sociable.”

If there’s one thing they would change about the design, it would be to have a window in the utility room.

“It gets very warm in there and although it vents into the garage it would have been a bonus to have a window as well,” says Eve. “Unfortunately it would have meant totally changing the layout in that part of the house so we agreed to leave it as it was. It’s been a huge learning curve but considering the fact that we haven’t built before, we think we got it about right.”

David agrees. “It’s a lot tougher than you think it’s going to be, and you have to be very determined to see it through. Towards the end of the build we were on site every day. We were in the fortunate position of being able to build without the pressure of a specific timescale, and we were also on the same wavelength in terms of what we wanted from the house. We listened to each other, and also to the experts, and always kept an open mind. Consequently we enjoyed the whole process and we are absolutely delighted with the result.”

Moving in and enjoying the look on people’s faces when they walked through the door. One friend came in and said: “Wow, what a pad!”

Waiting for planning decisions. We soon realised we wanted to change the look of the house from the outside so it was quite a nerve-wracking time, waiting to see whether we could actually have the design we wanted 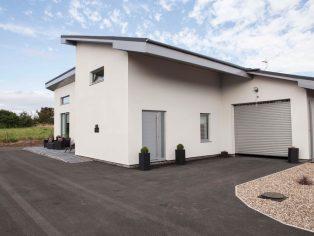