In 1840 Daniel Gooch, the newly-appointed 21 year old locomotive superintendent of the Great Western Railway wrote to Isambard Kingdom Brunel recommending Swindon as the location for a much needed engine works. In his letter he recommended that the then tiny hilltop town was the perfect location with “the great advantage of being on the side of a canal communicating with the whole of England, and by which we could get coal and coke”. He went on to say that collection of water might be a problem but “we have a great deal of side cutting that might be converted into reservoirs, and should even this fail us we have the canal”. And so, just four years later, the GWR Central Engine Station was a reality.

The site was subsequently extended with the provision of a three-storey building in the 1870’s to provide general office accommodation and airy light-filled drawing offices. In 1903 an additional storey was added in order to provide extra office space. Having ceased operating as an Engine Station this section of the building was acquired by English Heritage in 1992 to house the organisation’s extensive archives.

As part of the 1992 interior refurbishment to this Grade II* Listed building Selectaglaze, the UK’s leading designer, manufacture and installer of secondary glazing treated windows on the south elevation in order to improve noise insulation from the railway lines.

Recent rationalisation of English Heritage’s office space around the UK has resulted in an increased number of the organisation’s responsibilities being delivered from The Engine House by over 500 members of staff. This now includes a public access library, dark rooms, photographic conservation laboratories and meeting rooms. To facilitate these extra areas of responsibility the building required further renovation and conversion works which were put out to Public Tender. This included the requirement for “The thermal upgrading of windows by installation of secondary glazing units and draught proofing of windows” to specifications prepared by Oxley Conservation, an historic buildings consultancy. The successful applicant for the secondary glazing element was, again, Royal Warrant Holder, Selectaglaze.

A total of 100 sash windows of different sizes were treated using the slim profile Series 20 system for smaller windows and the heavy duty Series 90 range for ‘monumental’ style sash windows some with curved heads. Low emissivity glass was incorporated throughout to optimise the thermal performance.

Each window was individually measured and a bespoke frame made that fitted precisely to ensure a good seal. The windows arrived fully fabricated and were installed quickly and with minimum disruption to the fully functioning office.

Selectaglaze, founded in 1966 and a Royal Warrant holder since 2004, works with a very wide range of clients and has developed particular expertise in the treatment of period buildings.

The company provides an extensive range of literature and guidance notes covering acoustics, thermal performance and security and also offers a technical advisory service and a RIBA approved CPD Seminar for professional designers.

For further information, please contact the Marketing Department on 01727 837271; e-mail: enquiries(Replace this parenthesis with the @ sign)selectaglaze.co.uk or visit the company’s comprehensive website at: www.selectaglaze.co.uk 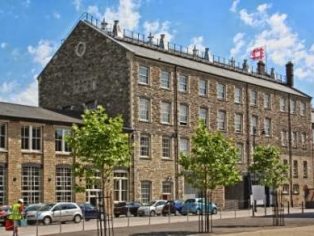