Don’t be afraid to face your Waterloo

Waterloo station concourse used to be a mad scrum that was daunting to all but the most seasoned commuters, but now the congestion has been eased and there are some great new shops and eating places, as James Pringle reports

Network Rail released station retail sales results last autumn that showed a 6.4 per cent growth in like-for-like sales for April to June 2013, while high streets only managed to add 0.4 per cent.

Trading at King’s Cross and Waterloo in London benefited from major investment schemes that allowed new retail facilities to be added to the stations. All Network Rail profit from retail activity is reinvested in the railway.

Architects’ Datafile profiled the King’s Cross redevelopment in August 2012, so let’s catch up with Waterloo. It’s the capital’s busiest station, and now it is home to a balcony of shops and eateries, which has been designed to reduce congestion on the concourse for the 300,000 passengers who use the terminal every day.

The pedestrian flow has been greatly improved by installing escalators and repositioning shops, previously located in the middle of the main concourse, onto the balcony. With new escalators and lifts, the main station now has step-free access to the Waterloo East station.

Providing 1,860 sq m (20,000 sq ft) of additional retail space, the station’s retail balcony brings new outlets for brands such as Yo! Sushi, Fat Face, Hotel Chocolat, Oliver Bonas, Links of London, Thomas Pink, Joules, Carluccio’s, Kiehl’s, Benugo’s, a Sports Bar & Grill, and Corney & Barrow’s new-concept bar, The Cabin. Once all the new shops are open, there will be 55,000 sq ft of shopping and eating across 38 stores.

The balcony is the longest at any British rail station, and is an eye-catching element of the £25 million improvements at Waterloo, as part of Network Rail’s programme to improve facilities and create ‘destination’ stations. The company is keen to stress that its retail and commercial activities generate vital funds that are reinvested directly back into the railway, limiting costs to taxpayers.

“As with the new western concourse at King’s Cross station in 2012, the Waterloo balcony work is part of our wider retail strategy to create ‘destination’ stations for both rail passengers and non-travelling customers. It also provides a crucial, sustainable source of income for the station, which can be reinvested directly into the rail network.”

Tim Shoveller, managing director of the Network Rail/South West Trains alliance, adds: “Waterloo, as many of our customers know, is a very busy station. We have more than 90 million passengers passing through every year and there is 30 per cent growth predicted by 2030.

“Our challenge is to deliver extra capacity so our passengers can get the rail services they rely on. We needed to find a radical solution to improve the space and facilities at Waterloo.

“The opening of the balcony, with the removal of retail units from the concourse, crucially reduces congestion while still providing the facilities expected at a modern station. Passengers will now find it easier to get to and from their trains. The next vital stage is to extend the platforms so we can run longer trains with more capacity, to cater for the predicted growth in passenger numbers.”

The refurbishment has taken place in a series of phases to avoid full closure of the important transport hub. Improvements at the station have included the creation of the ticket gateline – now the largest in Europe – across 19 platforms on the main concourse.

Bespoke metal ceiling tiles, concave coffered tiles with light apertures, bulkhead panels and column casings were specified from SAS International for this project. The SAS International Project Management team designed, manufactured and installed products, finished in SAS anti-graffiti paint, within the restricted time programme that was set out. In this phase, completed in 2009, the SAS Project Management team worked closely with Pell Frischmann, structural engineers and also the architects and the main contractor, J Murphy & Sons.

Another critical linking mechanism to assist passenger flow at the terminus is the Peak Hour Subway, which was completed in 2010. This refurbishment created a modern, open space designed for increased capacity over the coming decade.

The subway, which is accessed from the platforms, was originally designed to alleviate overcrowding at the main underground entrances at Waterloo Station. SAS International’s vaulted metal ceiling and stainless steel wall cladding, impact resistant and finished with anti-graffiti paint, were specified. The SAS Project Management team worked closely with BPR architects on the design, manufacture and installation of the architectural metalwork for this phase.

The balcony was the most recent of the three phases, which involved SAS International once again collaborating with a range of designers and project teams. It took 15 months and was completed on time and on budget.

Working with BAM Construction, SAS Project Management designed and installed an innovative solution for the curved aluminium soffit cladding to the underside of the new Mezzanine level and escalators.

A key benefit of SAS International’s involvement at design stage meant that ease of buildability in the construction process and consideration of ongoing maintenance requirements from the outset were factored in.

The scheme reduced congestion on the concourse and improved access to and from Waterloo East, with the installation of escalators and the relocation of shops from the middle of the concourse to the balcony.

The 220m long steel-framed balcony is unmissable, with its curved aluminium soffit cladding under the new mezzanine level and escalators designed and supplied by SAS International.

Malcolm Stamper, SAS International’s marketing manager, says: “A very modern aesthetic was chosen for the balcony which still manages to expose the older stone and brick vertical interior façade. By specifying metal cladding, with toughened glass for the balustrades, the BAM design team chose a durable and sympathetic material choice.”

David Packham, project manager at BAM, says: “The balcony appears to float above the concourse and not impose on the existing structure. Care was taken at balcony level to maintain its stone work and brickwork elevations but being carefully modified to accept the new styling for glass and signage, while retaining its stone and brick features.

“Materials were largely chosen by considering the quality of finish, and durability for such a high usage environment. The stone and brick were carefully cleaned to ensure these features were appreciated at balcony level.”

The appearance is in keeping with the original concept of high-quality finishes that can be readily maintained and be durable over a long period. Curved aluminium soffit cladding was installed to the underside of the new mezzanine level and escalators.

“The challenge was to achieve a robust and durable solution while answering aesthetic demands,” adds Stamper.

“The main thinking related to the contrast between the original Edwardian building and a modern but elegant structure, designed to appear as a lightweight structure on a colonnade of light columns,” says Packham.

The Waterloo hub is not only used by commuters but is a gateway to the cultural attractions of the South Bank and beyond, including the Royal Festival Hall, the National Theatre, Shakespeare’s Globe and the Old Vic. Rail travellers are pleased to see Waterloo keeping pace with the attractive makeovers at King’s Cross, St Pancras and other London mainline terminals. 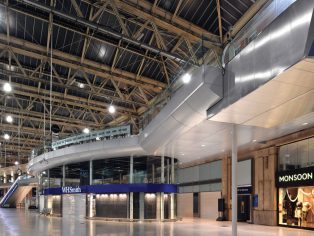 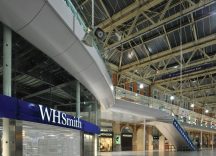