DDP Seoul welcomes over 8.5 million visitors in its first year

Dongdaemun Design Plaza (DDP), Seoul, Korea welcomed more than 8.5 million visitors to its exhibitions and events since opening at the end of March 2014.

Composed around Seoul’s ancient city wall and the historic artefacts discovered during its construction, DDP connects the city’s contemporary culture and history with the emerging nature of its new public park. A place for people of all ages, DDP is a forum for the exchange of ideas, engaging its community in a collective dialogue where many inventive contributions feed into each other, allowing talents and ideas to flourish.

DDP builds new synergies and opportunities for Korea’s creative communities with its program of events and exhibitions that include host to Seoul Fashion Week, Apple iPhone 6 launch, Culture Chanel and the Style Icon Awards. 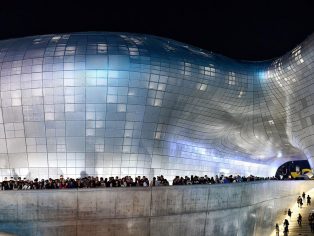