Construction at Andermatt Concert Hall in is coming along nicely. The project, which is set for completion later this year, is located in the Swiss Alps. BESIX and Andermatt Swiss Alps Development are transforming the traditional Swiss Alpine village of Andermatt into one of the world’s finest year-round destinations; boasting some of the best alpine and off-piste skiing facilities in Europe and fast becoming one of Switzerland’s largest resorts.

Andermatt’s new village square will host multiple hotels, residential and chalet facilities, and as part of this new development, Studio Seilern Architects was asked to provide a world-class concert facility to be located at its heart. The project will transform a building that was originally intended to be used for conventions and events, converting its existing shell to adhere to the acoustical requirements of a state-of-the-arts concert hall.

We will be lifting a large section of the roof, allowing daylight to penetrate the space and increasing the effective acoustic volume from 2000m3 to 3500m3. As a result, the concert hall will be now able to host large orchestra concerts and louder orchestral ensembles. The raised and extended roof will create a covered plaza and an alternative entrance to the concert hall, allowing it to be independently accessed directly from the adjacent hotels.

Acoustic reflectors will flow through the upper volumes of the hall creating a dynamic view from the raised ground level. A centralised stage will sit against the foyer. This placement transforms the foyer into a crossover space for orchestra access during the performances, creating an intimate feel where audience and musicians are physically close and visually connected. 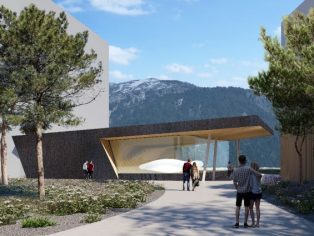 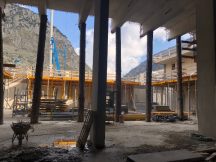