The Doddington Estate is a privately owned country estate, and in 1776, Samuel Wyatt was commissioned to design Doddington Hall as it stands today. Assael Architecture was appointed to design the scheme which will consist of a 120 room hotel, restaurant, bars, function rooms, and the integration of the old stables. A modern three-storey extension will include additional rooms and spa.

Assael’s design has been driven by the requirement to create an elegant and sensitive addition to the existing buildings on the site whilst enhancing the character of the hall and surrounding context; executed in a complementary, coherent and sensitive palette of materials. Brick forms the primary material for the new-build elements, with the introduction of copper at roof level.

The brief established the requirement that minimal changes were to be imposed upon the internal layout of the hall. The Piano Noblie level, an area of high heritage sensitivity, retains function rooms with historic decorative finishes that will be restored to their former grandeur. Conversion of the first floor into hotel suites requires some of the smaller family rooms to be combined, with en-suite layouts in a ‘pod’ format, to minimise the impact on the existing fabric. Rooms at the lower ground floor and basement level of the hall will be configured for ancillary and back of house functions for the hotel; typically in harmony with their original conception and use.

A modern glazed covered walkway acts as a link between the new and existing buildings and forms an important feature of the scheme allowing for an all-weather connection between the main hotel and stable block.

“We took a fresh approach to the design of the scheme to help bring the estate back to life, whilst protecting the future of Doddington Hall and its surroundings. We placed particular emphasis on sympathetically introducing new buildings into the historic setting, careful conversion of the heritage buildings and retention of the original features of the Grade l listed hall.”

The scheme also includes the sensitive restoration of the Grade ll park and garden by Barnes Walker Landscape Architects. 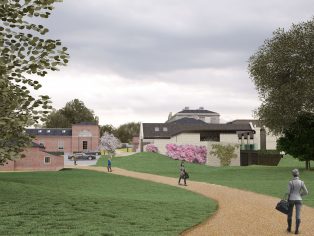