The designers behind the new Anomaly office in London tore up the rule book to create a 12,000 sq ft workspace for 140 employees that is the antithesis of a traditional corporate office.

Completed this August, the London base for Ad Age’s 2017 Agency of the Year was inspired by the company’s ethos to challenge the norm, as Anomaly’s name suggests. The space will support the company’s ongoing growth in Europe, while cementing its culture and providing a home for Anomaly’s diverse, entrepreneurial and creative thinkers from all over the world.

Direction for the space was driven by the company’s motto, a quote from George Bernard Shaw:

The architect and office design, fit out and refurbishment specialist Morgan Lovell worked closely with the Anomaly leadership team to imagine and deliver a workspace that celebrates the informal, the irregular and the seemingly unreasonable, including dedicating an extraordinary 75 per cent of the office space to informal working.

In keeping with each of the other six international Anomaly offices, this space in London is completely open plan, purposefully designed to support Anomaly’s ethos of open, entrepreneurial and collaborative working.

“Anomaly exemplifies George Bernard Shaw’s belief that ‘progress is in the hands of the unreasonable men’. Having worked creatively with Barr Gazetas in the past, I knew that they would relish a brief to push boundaries and disrupt the status quo.”

The new offices are located on the 5th and 6th floor of 25 Charterhouse Square, a recently completed seven storey office building in Smithfield developed by Helical where Anomaly is the first occupier. Historic Charterhouse Square features a central garden, and architecturally significant buildings from Tudor times to the Art Deco period.

The anti-corporate approach is manifest from the moment of arrival. There is no reception desk or reception area. Instead visitors to the sixth floor arrivals lounge can order a drink from the bar, or take in the 360° views of historic Charterhouse Square in London’s Farringdon, before heading off to the spectacular 1,000 sq ft Board Room.

“‘The interiors are a mash-up of London’s history, colour, energy, creativity, irreverence. Visitors will think ‘London’ and ‘different’ within seconds of arrival.”

At the heart of the office is a broad timber staircase connecting the two floors, exposing the raw edge of the concrete slab and new steel beams. The unfinished edges are a deliberate contrast to the smooth clean lines provided within the landlord’s fit out and tie in with the rough cut finishes of the staircase and balustrade. At the base of the stairs on the 5th floor is an auditorium space comprising of textured bleacher seating clad in scaffold planks. Quiet reading booths are cut into the rear of the bleachers.

The staircase is central to the loose clustering of communal and solitary spaces that allow employees to choose the way they work on a daily basis, dependant on mood, task and interaction with each other.

The interiors of the global agency’s London office reflect London’s history, its creativity and the building’s specific context. Lining the stairwell is a unique graphic wall by artist SHOK I, who is also working on a memorial for London’s Borough Market.  The stairwell mural relates to the plague burial ground in Charterhouse Square and features translucent bones on a black background. The colour palette for the interiors references the traditional Fox and Anchor pub nearby. There are also references to the building’s previous life as a hat factory.

Morgan Lovell’s design team leader Amanda Godwin-Jones says that an unusual approach was taken to deliver this project, combining the skills of an architect and design and build contractor to create a workplace with a difference.

“We’re acutely aware that the office environment plays such an important role in creating and promoting a certain culture, which why this space had to meet Anomaly’s objective of attracting and retaining employees who challenge the norm. Right from the outset, we felt an immense responsibility to develop the Barr Gazetas concept into designs and a physical space that would have a huge impact on life within Anomaly’s walls.”

“Onsite, our team had to work fast to complete an entire floor by mid-July so that the Anomaly team could move in and settle into their new home while the second floor was completed. This is why the biggest structural part of the work – building the staircase – had to be completed upfront to minimise disruption to the day-to-day. From receiving the drawings of the building to the finishing touches, the staircase took three just weeks – a process that normally takes 2 months!”

The furniture is an eclectic mix of new, repurposed and vintage pieces which are mixed to create a lively and unconventional environment. Neon signs, custom made coffee bars and distressed furniture all mingle in a very promiscuous way. Much of the raised floor has been left exposed as metal surfaces and this idea of “raw and cooked” works for all material choices including Crittal style glazing, timber floor finishes, raw ply linings, scaffold board cladding, raw lacquered steel and metal mesh.

The project was commissioned in March 2017 and completed within 5 months.  The team was able to deliver within the limited timescale for delivery because of a track record of successful collaborations between Barr Gazetas and Morgan Lovell. 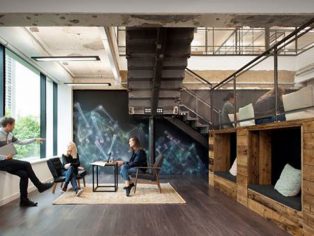 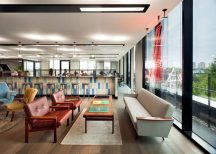