Arts South Australia have posted a digital gallery of the six concept designs devised by star international and Australian teams for a new landmark cultural destination, Adelaide Contemporary, which is intended to revitalise the former Royal Adelaide Hospital (oRAH) site.

The concept designs are now available to view on the international competition website at competitions.malcolmreading.com/adelaidecontemporary/shortlist and in a free-to-enter public exhibition at the Art Gallery of South Australia.

In a world first, the Gallery of Time will curate South Australia’s exceptional collection of Aboriginal art and cultures in conversation with work from European and Asian cultures, enabling visitors to look at Australian art in a global context.

Premier of South Australia Steven Marshall said the outcome of this competition will be integrated with the Government’s broader vision for the oRAH site, including the National Aboriginal Art and Cultures Gallery.

“We want to create on the oRAH site one of the most significant new arts and cultural destinations of 21st century Australia.”

“Our plan will provide a national focal point for Aboriginal and Torres Strait Islander art and cultures as well as new spaces for major exhibitions, and the opportunity to unlock the hidden treasures of South Australia’s cultural institutions.”

“This truly unique and ground-breaking precinct is destined to become a beacon of artistic, cultural and architectural excellence internationally as a culmination of the long-held plans of the South Australian Museum and the Art Gallery of South Australia to better showcase their collections.”

“The precinct is envisaged as an important economic driver for tourism and business investment creating new jobs and inspiring spin-off business initiatives.”

“Adelaide is regarded by many as overdue for a major new cultural infrastructure investment.”

“The Government’s policy supports the development of this proposal which will draw together long-held ambitions from cultural organisations like the Art Gallery of South Australia and the South Australian Museum.”

“Their collections, the overwhelming majority of which are currently not accessible to the public, deserve to be showcased.”

“This is one of the most important sites in Adelaide, and a landmark project that could set the city’s compass for the next few decades, so we’re delighted to reveal six possible futures from some of the most exciting and accomplished design teams in the world.”

“Commissioning outstanding architecture is a way Adelaide can say to the world what a fantastic, dynamic city we have, and how deeply creativity is woven into our DNA. We have the art to put in the building; we have the appetite and momentum to make this happen.”

“These proposals are all highly sophisticated. Some are more dramatic, some more subtle but all announce a destination and tantalise with the promise of an experience that is out of the ordinary.”

“The winning design will be developed in close partnership with Arts South Australia and other stakeholders.”

The six finalist teams were selected in December 2017, by a panel chaired by Michael Lynch AO CBE, from 107 teams made up of circa 525 individual firms applying from five continents.

The jury, made up of nine eminent figures from the arts, architecture, culture and business (see Notes to Editors for full list) will subsequently meet to interview the teams and the winner announcement is expected later in the year, bringing to a close this stage of the project.

Adelaide is located on the traditional lands of the Kaurna people and the project site, close to the Art Gallery of South Australia and part of the former Royal Adelaide Hospital site, is rich in Kaurna heritage.

The conditions for Stage Two of the competition have been formally endorsed by the Australian Institute of Architects. Each team will receive an honorarium of AU$90,000 for their competition work including their concept design.

For further updates please visit the competition website at competitions.malcolmreading.com/adelaidecontemporary/news 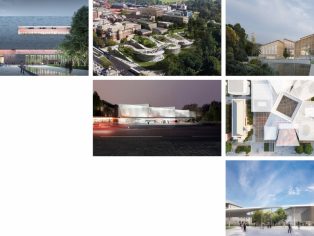