Discreetly hidden in a quiet cul-de-sac in Finchley, north London is an unconventional compact home, designed for a young client who was looking for a way to combat London’s housing shortage. James Parker reports

According to its architect Nick Pocock of Ashton Porter Architects, Hush House was given its enigmatic name because although it’s a striking piece of contemporary architecture, it’s “hidden in plain view,” in the heart of London suburbia. The architectural practice behind the project specialise in distinctive residential commissions large and small, as well as having a strong foothold in the commercial and cultural sectors, but this project was a very particular solution to a common problem. The client was a young first-time buyer in their late 20s, and a victim of the London house price bubble caused by the yawning gap between supply and demand. Despite earning a decent salary, finding a home within a short distance of work in north London, and one which they could envisage living in long term, had proved impossible given the state of the market. For the architects, the opportunity to help offer one solution to this endemic problem was a key factors which made this project an compelling proposition. The client had scoured local properties before coming to the conclusion that with a new one-bed apartment in Finchley starting at around the £400K mark, a more creative solution was needed. After discussing the predicament with his parents, who live in a fairly substantial home in east Finchley, they agreed to let him demolish their garage and build a house in its place. The client then came to Ashton Porter with his “vision”, and the practice, which has been trading for around 20 years, “were very pleased to take it on,” says Pocock. He continues: “It takes firms quite a bit of time to find a project which has all the sorts of key challenges which architects like to sink their teeth into, and it was certainly one of those”. Although the architect was proposing a new home which would have a curtilage not much wider than the detached garage it was replacing, the tight site meant that planning constraints would be a chief concern of the architects, in terms of issues such as overlooking and right to light. While the client would be living cheek by jowl with his parents (there’s a 1 metre gap between the two properties at ground level), the benefits of this were balanced with the need to ensure that both properties were offered the necessary privacy.

Pocock explains how the planning constraints together with the wider context in fact helped the architects to arrive at an unusual solution, which made a virtue of its compactness: “We were bound to quite tight conditions in terms of how we could occupy the site, so we decided to design it as a sort of sculptural object, effectively as a counterpoint to the typical typologies”. Finchley is an archetypal north London suburb, with a varied range of building types “generally developed quickly between the 1930s and 1970s,” says Pocock. He adds: “There is a broad range of vernacular in north London suburbs – they are very diverse, with buildings extended over time – some quite lumpy and ad hoc additions.” This lack of a fixed aesthetic context actually gave the architects more confidence in proposing a design which would unashamedly defy excessively polite suburban housing design. However the discreet site, at the end of a cul de sac and set back from the road, further enabled the designers to do something a little different from the norm. Pocock comments further on the design intent: “Often in suburbs people expect quiet, unassuming houses, but places can be fairly boring. One thing that interests us is stopping thinking of the suburbs as the status quo”. Somewhat counter-intuitively, a feature which the architects thought might please Barnet council planners, that of angling a parapet as a nod to a nearby church in Friern Barnet, was in fact rejected, and the project now has a flat roof, minimising the two-storey addition’s impact on the skyline and providing for the possibility of future additions of a green roof or PVs. The architects were able to “develop a detailed discussion” with planning officers however, which was critical in ensuring its smooth passage through planning. With the new house so close to neighbours as well as the owner’s parents, the design proposals were shared with neighbours throughout, helping to “foster a proactive relationship” as Pocock describes it. In addition the architects successfully persuaded the parents to block out the windows facing directly onto the plot, which was a planning requirement. Ashton Porter then progressed a tried and tested approach of creating physical models to begin to find the right form for this particular site. “There’s never really a simple solution – we developed the design in a series of stages, and it meant we had to work through a series of physical models”.

The eye-catching box-like form which was eventually arrived at is a consequence of playing with form and paying close attention to complementary materials. The house is clad in a Staffordshire slate smooth blue brick at ground floor, with dark “anthracite” zinc wrapping the first floor diagonally across a series of unevenly placed windows. “It was essentially plotted as a quite sculptural sort of ribbon,” explains Pocock. He continues: “Both materials were chosen not as a nod to local characteristics, but from the idea that they were complementary to each other”. The contractor PVR had to be closely engaged through the development of the models – as the architects explored ways of artfully blending the two materials. “Nothing could have been more dull than just having a uniform split between the first floor in zinc and the ground floor in brick”. In a similar way, brick was chosen not in deference to the local vernacular, or because it’s currently in vogue, but because the architects “were keen to explore brick as a contemporary material”. Three-way conversations with client and builder resulted in the decision to also use flush pointing in a grey pigmented mortar, giving the effect of an almost continuous purple-grey surface to the ground floor, which is “highly contemporary,” Pocock asserts. A key brickwork detail which signals the non-standard nature of the house, is special pigeonhole corner junctions. Rather than specifying a custom-made brick, the architect and client preferred the idea of “leaving a mark of craft” to show the attention to detail applied by the contractor. Due to the unconventional design, bringing the contractor on board was key to success. As Pocock puts it, “One thing that’s tricky to do with domestic small-scale projects when using contemporary materials is finding a local builder who can work on that scale and do something that’s highly different to a normal project.” The fact the architect had worked with the contractor previously on projects and the fact “they were fully appreciative and understanding of the dexterity needed” was key to the achievement of the very precise result. One practical aspect which greatly benefitted the construction was that the pre-existing garage had a shallow concrete foundation, which could not be known until work had begun to demolish it. “It’s always a nice surprise when things are less bad than anticipated,” laughs Pocock.

Another unusual aspect of the project is not just its C24 engineered timber frame, but that it has a Vierendeel truss running across the first floor, eliminating the need to have any loadbearing walls at ground floor. It is a Kerto glulam beam the thickness of the entire floor, enabling the entire ground floor to be an open space, “one of the key priorities for the client,” says Pocock. The perimeter walls effectively act as a load-bearing secondary structure, with all first floor joints and roof bearing on the truss. However establishing the buildability of this, particularly within the tight £220,000 budget, was crucial, and a “quite ambitious” structural engineer was engaged to help ensure its viability. The fact the house has a timber cantilever of around a metre to the rear of the master bedroom, which juts out towards the trees ringing the garden giving a discreet feel, is another structural achievement. “Timber is very adaptable, and easy to work,” says Pocock. “This greatly benefited the project, rather than doing something like a complicated steel package which would have added a fair amount of cost.”

While the Vierendeel truss solution delivered the open downstairs – another deceptive differentiator in a small (108 m2) house such as this – Pocock admits the open space created for the ground floor created its own challenges. “With no load-bearing partitions, it certainly made us think about how best to come up with a solution in terms of how the layout worked”. Entered through a space-saving sliding door, the open-plan living, dining and kitchen area has an engineered timber floor and services ranged along the south wall, with a staircase fitted in along the front (east) elevation. Its window’s rhomboid shape follows the line of the stairs, contributing to the abstract composition, and is frosted for privacy from the four-car shared driveway outside. The living area has a quadruple-bifold door facing north onto the garden. The architect managed to extract a full double-height space in the entrance way, with a glass-balustraded-landing passing overhead, gaining views of the garden through a full height narrow window. Says Pocock: “The ability to have a conversation with somebody downstairs is a good thing to have – we were trying not to close off the living space from the private areas upstairs”. The first floor has two carpeted bedrooms and two bathrooms – the master bedroom which cantilevers over the bifold doors having an ensuite. Pocock says the bedroom jutting into the garden “is very surprising for a north London suburban typology, it’s satisfying”. The timber frame has not been exposed, due to reasons of fireproofing and keeping costs down, says Pocock, however this also assisted the client’s desire for a simple interior in what is a very compact house. “We didn’t want to go overboard with too many facing materials – we kept a monochrome palette”. The architect notes that part of maintaining that clean look internally was the benefit of using windows, made by Velfac, with very discreet trickle vents to offset the highly air-tight construction. “They have a really minimal slot on the side of the frame – one of our pet hates is windows with things that can appear like a long block at the top”.

The client’s father was “incredibly surprised” that the designers were able to get permission for something so apparently out of keeping with suburban north London, but Nick Pocock happily reports both parents are “incredibly proud that their son managed to put something like this together”. The client is “not interested in moving any time soon,” says the architect, clearly very gratified to have achieved a long-term solution in what is a very problematic market for young prospective homeowners. “Often because of the housing shortage, people are often moving far away from their relatives. To be part of something that’s not just about making a piece of contemporary architecture, but also about doing something socially responsive, was something you don’t always get to do”. Following being shortlisted for national awards including the Structural Timber Awards, including a presentation at Ecobuild, this small, unconventionally formed, and discreetly hidden house is attracting the limelight. 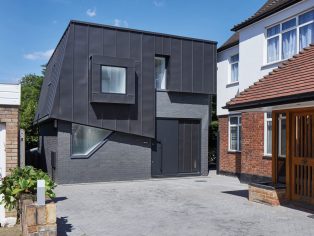 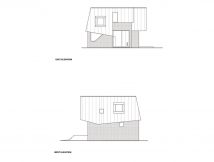 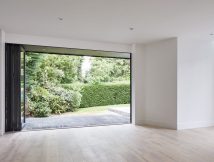 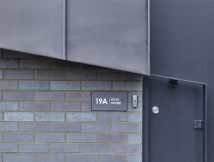 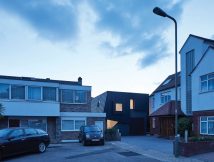