Bentinck Street lies between Welbeck Street and Manchester Square in the heart of Marylebone and was named after the family surname of the Duke of Portland. Back in the Victorian era Charles Dickens lived down this street for some time with his father.

Number 20, part of the Howard De Walden Estate, has been transformed into a high spec orthopaedic clinic. The original timeworn windows were draughty and allowed high levels of noise ingress. The building is within a conservation area, so it was specified that the Georgian facade remained.

Architects Frank Shaw, generated a design to make the building function in its new role as a clinic. This involved the fitting of secondary glazing to the front elevation of the building, to enhance the acoustic performance and thermal retention of the original glazing.

The Series 41 side hung casements were specified, as these have a flush glass to frame detail which minimises the build-up of dust and dirt on ledges. This is an important consideration when specifying building elements for controlled environments and where there is a requirement for infection control, such as recovery rooms and operating suites. All the casements were glazed with sealed units housing integral blinds, which again helps maintain a clean environment, as well as to help provide patient privacy from the overlooking neighbours.

Selectaglaze subsequently installed 30 units. A tight fitting schedule was set, due to the opening of the centre in Autumn 2017. The installation was a success and the thermal and noise enhancements can be felt in the rooms already. With the addition of secondary glazing, it is hoped patient stays will be quiet, comfortable, private and clean.

Founded in 1966 and Royal Warrant Holder since 2004, Selectaglaze has a wealth of experience working on all building types from Listed libraries to new build hotels, with each unit bespoke to the individual needs of the project.

Selectaglaze will be exhibiting at the UK Security Expo, at London Olympia on the 29th and 30th November 2017. Located on stand L66, Selectaglaze Technical Advisors will be happy to answer any secondary glazing related questions. 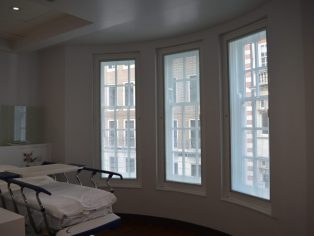