The expansion and modernisation of the mill has seen it upgraded to continuous press technology, which will significantly increase the capacity of oriented strand board (OSB) production at the site from 350,000 to 640,000 cubic metres to help meet growing demand from the UK and Europe.

The investment has nearly doubled the size of Norbord’s site in Dalcross, Inverness and helped to secure its long-term future in the area.

The First Minister attended the official opening of the new line and had the opportunity to meet members of staff instrumental in bringing the project to life over the past four years, which comprised two years of planning and two of execution.

“Norbord’s £95 million expansion of its Dalcross plant is one of the largest single inward investments made into Scotland. It will significantly increase capacity and demonstrates the vibrancy of the Scottish forestry sector. This is a welcome investment for the Highlands that will secure a long term future for the factory. It has received more than £12 million support from Highlands and Islands Enterprise and is expected to generate £37 million gross value added of new economic activity for the Scottish economy each year, of which £22 million would be retained within the HIE area.”

“The launch event was the culmination of several years of work to dramatically increase the capacity of the plant and a fantastic celebration of our investment and commitment to Inverness. It was a pleasure to welcome the First Minister to witness first-hand the positive impact the project is having on the community. The new line will help ensure we continue to be a leader in OSB production by meeting our customers’ increasing demand for the product.”

“We have worked closely with Norbord and we are delighted to support the company to invest in its Highland base. The expansion will bring economic and job creation opportunities for the area as well as boost the Scottish forestry sector. The positive impact of this development will be felt well beyond Inverness and the Inner Moray Firth. Norbord is not only a significant local employer in its own right; it also plays an important strategic role in the region’s forestry sector and is a major user of haulage companies and port infrastructure. It’s great to be here today to see the unveiling of the new site.”

The Inverness plant opened more than 30 years ago and was the first OSB mill in Europe. 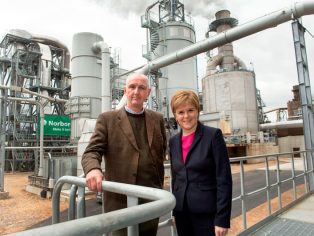